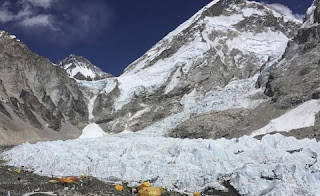 In the growing warmth, the corpses appear on Mt. Everest:


Melting glaciers on Mount Everest are exposing the dead bodies of climbers previously entombed in ice, as global warming causes temperatures to rise.
Almost 300 climbers have been killed attempting to climb the mountain since the first attempt to scale it in 1922.

I guess warmth may have that effect -- to expose what was in plain sight the whole time.
For example:


Mina Guli has run 62 marathons – one a day since early November. She planned to run 100 to focus attention on the world’s growing water problems, but now she’s broken her leg and can’t go on.
Ms. Guli, 48, is an Australian lawyer and businesswoman. In 2012, she decided to focus on helping the world face its water problems. Ms. Guli said that when she saw a river that had dropped 20 feet (6 meters) in six years, she realized she needed to do something.
Experts think that by 2030, people will need much more clean water than we’ll have on the planet. By then, the United Nations expects water supplies to be limited for about half of the people on Earth.

In her travels, Ms. Guli has seen people who weep for water.

The warmth rises and the bodies appear. The past rises up to assert its place in the skein of things. Is this a joke? Was it ever missing? Just because the movie runs a "the end" credit, is that really the end of anything. What preceded "the end," what "succeeded" it? The warmth thaws a kind of wilful ignorance that longs for a "the end." Neat and tidy as "the end" may be, still there is all that history that preceded it ... and thence, succeeded it. Life is not neat and tidy, as much as I might prefer to forget and move on and heal and improve. 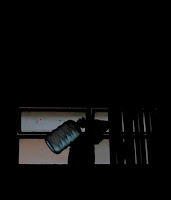 In Venezuela, a land struggling to feed an increasingly hungry population seated on one of the world's largest oil reserves, a woman observes:  "It's hard, too hard, you can die without water," she said. "We weren't aware of this before. Water now is gold."

I once read (but can't winkle out) a Los Angeles Times story about a reporter who was actually sent to Tibet to assess the thrall in which Tibetans might feel themselves in the wake of a Chinese 'invasion.' Once upon a time, Tibet was ruled by the Dalai Lama and his Buddhist coterie. Bumper stickers in the United States read, "Free Tibet." To hear the tale told, you might have thought the Dalai Lama and his disciples got the bum's rush and were oppressed. And perhaps they were.

Yet in the midst of the LATimes story was a line that came from a local farmer who had lived under both sets of rulers -- the Dalai Lama and the Chinese: He said, simply, "Well, at least we're not slaves any more."

The warmth encroaches, the bodies appear and what was never missing reattaches its caboose to the train that always pulled it. Just because a conclusion is convenient does not necessarily mean it's true ... or untrue either.

Warming grows and Monty Python springs to mind: "Bring out your dead!"
Posted by genkaku at 1:10 PM