the ascendancy of the White Man

Well, take another look and perhaps learn to savor -- in "El Norte; The Epic and Forgotten Story of Hispanic North America" -- the Hispanic roots and culture that preceded the preposterousness of the White Man's claims: 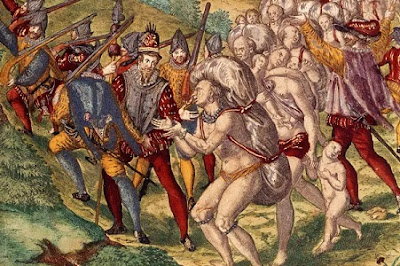 This point of view persists. In the 2000s, the historian Samuel Huntington wrote that “America was created by … settlers who were overwhelmingly white, British and Protestant” – and therefore the arrival of Hispanics in large numbers remained a direct threat. Huntington denigrated such immigrants as people with “dual nationalities and dual loyalties”, because of their Spanish language and Catholic religion.

Arrogance is so much easier to spot in hindsight, but still, when it flows from the pens of those claiming to be historians ... JesusfuckingChrist! Exceptionalism is so enormous that it can make you choke when trying to separate Donald Trump's disciples and the rest of us soaking up 'American' history.
Posted by genkaku at 5:01 PM