kids teach themselves to read 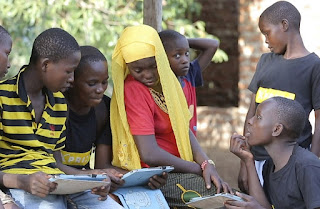 If their 'adult' population is too busy and crazed with unkindness and ignorance, perhaps the kids can teach themselves:


LOS ANGELES (AP) — The challenge was to develop software that could easily be
downloaded onto tablets that poor children around the world could use to teach themselves to read, write and do simple arithmetic. The incentive was $10 million for the winner.
Nearly 200 teams from 40 countries around the world jumped at the chance to become the latest winner of an XPRIZE, a coveted international award funded by future-looking entrepreneurs, billionaires and philanthropists who have banded together with the goal of making the world a better place through technology.
After 15 months of building software, putting it on tablets and having thousands of children in 141 remote villages in Tanzania test it, judges narrowed the competition for the XPRIZE For Global Learning to five final teams from New York City; Pittsburgh; Berkeley; London; and Bangalore, India.