"Rev. Adam" gets an email 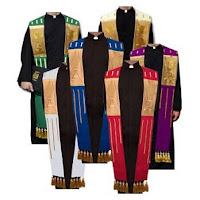 "Hello Rev. Adam," yesterday's e-mail began, before reminding me that it had been 12 years since I signed up to become a minister at something called the "Universal Life Church Ministries."

Twelve years ago, I vaguely recollect, a Zen friend had asked if it were possible for me to officiate at his wedding and I went about finding out how that might be possible, and, in pursuance of that goal, signed on to the church in the belief that bureaucracy loves bureaucracy ... et voila! in a few moments on the Internet, I was a minister, somehow.

Now, 12 years later, there was additional paraphernalia the church thought I might want:


Have you been taking full advantage of your status as a legally ordained minister?...
No matter what activities you might have planned moving forward, we've worked hard to ensure that our site is stocked with all of the information and supplies that you may need to meet any challenge that comes your way and continue your mission to make the universe a better place. ...
[Y]ou've probably officiated your fair share of ceremonies by this point, but are you doing so in full regalia? If you'd like to add a bit of flair to your clergy outfit, consider picking up an official ULC stole! Our stoles feature tasteful gold stitching, high-quality tassels, and are available in a range of color options.

"Tasteful gold stitching ..." I especially liked that. What is a minister without a stole with tassels?

There is no real need to get snarky about such email plaints. Everybody's doing it and it ain't cheap. The email I received mentioned no prices but I do know that Zen paraphernalia costs a bundle (hats and robes and sticks and ... well wowsers!) No doubt the Zen tassels are 'tasteful-er.' You need fins on the car if the car is to be believed, I guess.

But what a strange blast from the past. Just about the time my 'religion' is fading in the rear-view mirror, here comes a reminder of the excesses I was prone to in the past. "Hot dogs here! Getchyer hot dogs!" Do people believe more or less in this internet age? It's so nice to have someone leading the charge ... and well-dressed into the bargain! It's nice to have a serious cast to what feels like a serious step like marriage, so ... getchyer hot dogs!"

But religion feels to me -- or is it just me? -- as if it were dwindling-dwindling-dwindling. My Zen teacher said simply, "take care of your family." He didn't have any tassels that I knew about, but maybe he stowed them away or only put them on for Halloween. Did this make him wrong or apostate in some Zen Buddhist sense? I don't know. He was a prickly, spike-y little man who didn't take crap from anyone.

My anniversary has come and gone.