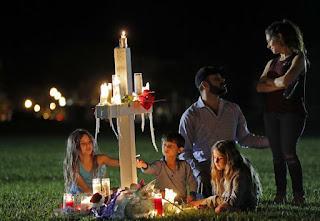 Perhaps if, every time a child or teacher or other school worker were shot to death, a lottery-picked member of the U.S. Congress or executive branch were summarily executed, there would be more action on school shootings. Maybe not, but maybe so.

Seventeen people were shot to death by the latest gun-toting loon in Florida Wednesday. Others were wounded.

Everyone cares, but the fact is, no one gives a shit.

So, shoot a politician or political professional....

And revise the American outlook: America executes its children and those who look after them. Political cowardice is well-documented, so let's stop pretending ... we kill kids because politicians need money to get re-elected. It is easier to digest once the word is spoken aloud ... just once ... cowardice.

Who might carry out such executions -- they ought to come as a surprise, don't you think? -- is pretty much a no-brainer: The U.S. has JSOC and if they're too busy, Israel's Mossad seems to have the requisite sang froid.

If anyone uses the word "barbaric" to describe such a solution, how then would they describe the American penchant for executing those attending schools?
Posted by genkaku at 8:36 AM