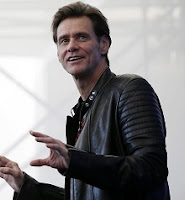 LOS ANGELES (AP) — Delete your account.
That’s what Jim Carrey says Facebook users should do, as the actor looks to pull the mask off fake news.
The star of “Ace Ventura: Pet Detective” and “The Mask” said on Twitter on Tuesday that he’s dumping his Facebook stock and deleting his page because the social media giant profited from Russian interference in the U.S. presidential election via spreading false news with Russian origins, and says the company is still not doing enough to stop it.

My own somewhat inept petition to get hackers worldwide to pick a future date and then excise as many references as possible to Donald Trump on that date for 24 hours has somewhat the same flavor ... or so I like to tell myself. If ever there were a purveyor of "fake news," Donald Trump is the king and Facebook, etc., are his hand maidens.
Posted by genkaku at 8:43 AM