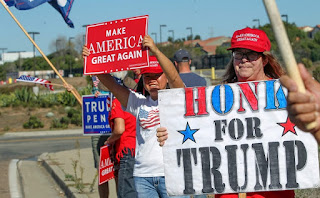 It may be just another junk poll, but here is one swing at who, precisely, is consuming various kinds of media swill.


Low-quality, extremist, sensationalist and conspiratorial news published in the US was overwhelmingly consumed and shared by rightwing social network users, according to a new study from the University of Oxford.
The study, from the university’s “computational propaganda project”, looked at the most significant sources of “junk news” shared in the three months leading up to Donald Trump’s first State of the Union address this January, and tried to find out who was sharing them and why.

Does anyone feel, as I do, an up-swelling of lassitude when reading such things? Are polls really telling us anything? I suppose so, but I'm not sure what.