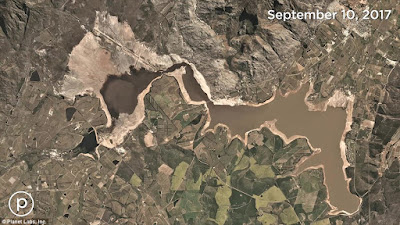 Day Zero is looming for Cape Town. According to the latest estimates 16 April is when the city’s water supply will be turned off until the rains arrive, leaving residents to line up for water rations at one of 200 points across the city.
The scramble for water is already raising tensions among residents. Freshwater springs now require 24-hour policing as congestion builds in surrounding streets and there have been sporadic reports of fights break out in the lengthy queues.

Elsewhere in Africa (Donald Trump's "shithole"), many are likewise gasping for water.
Posted by genkaku at 10:12 AM