.
Sometimes I think that, as part of a good education, everyone should have the opportunity to get dirty, both literally and metaphorically. Getting Dirty 101.

On the literal front, there are Muslims who show their breeding by using only the first joint of the first three fingers of the right hand when eating. Only slobs like me get sloppy beyond that point. And other cultures have other forms of good breeding -- dressing, singing, walking, speaking, whatever.

But the trouble arises when there is some notion that NOT adhering to the marks of good breeding really show much of anything. Slob or no slob, a man has to eat. And nourishment trumps breeding any day of the week. A mind fixed on a single approach -- a well-groomed and well-shaped approach -- is a tight and limiting mind. Also, it's not much fun.

The first real chore I ever had in life was shoveling horse shit in the fourth grade. I didn't think of it as dirty, but I suppose that in some lexicons it might be seen that way ... scooping up horse manure, throwing it into a honey cart that ran on overhead wheels in the alleyway behind the horses, and eventually dumping it in a pile by the side of the barn. Inevitably, some of the shit got on my clothes and I ended up, like other kids who took care of horses, smelling like horse shit ... a smell I enjoy to this day.

But some never get the opportunity to get dirty -- to step outside their upbringing, to take a risk, to be inept, to stretch the stiffened boundaries. It seems a pity.

In spiritual life there really are people who never get beyond their culture -- the culture of refined and fine belief. 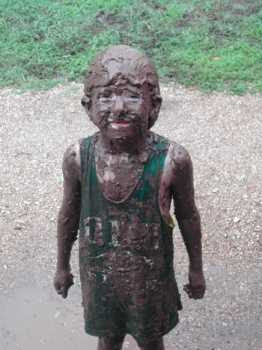 If they are Christians, they never open the windows of the mind to wonder, "Who are those people who think Christianity is a crock? We are all human together, so I should be able to understand that in a non-uppity way." And Buddhists the same. And Jews. And Hindus. What are things like where the aroma of horse shit fills the air and I am out of my depth... where the best I can muster is a heart-felt eeeeeeuuuuuuuuw!

I guess it is a delicate matter, challenging or questioning the starched collars we may wear in this existence, but somehow I think that without such an effort, the effort we do make will always fall short of the peace we hope to achieve by wearing starched collars in the first place. Not that starched collars are somehow wrong ... it's just that they may need a little loosening ....