getting my chain yanked 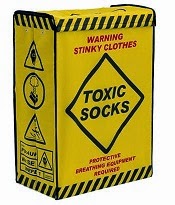 After watching the documentary alluded to in the previous post -- "American Radical: The Trials of Norman Finkelstein" -- I came away feeling like a much-used sock left in an athletics locker ... smelly, somehow; clouded with unpleasant odor; icky.

At first, it was hard to say why I should feel turned off by a topic that has all the makings of a theme that turns me on: Norman Finkelstein has made a habit of challenging the Israeli narrative about Palestine and the Palestinians. He has made a lot of high-profile enemies, but the fact that he brings facts to bear and that he himself is Jewish by heritage and it is harder to nail him to the cross with the always-kept-handy "anti-Semitic" put-down.

So ... a topic (dead and dying people often referred to only as an afterthought in the bright hope of a beleaguered Israel) that lights my fire. So... an underdog challenging the tales told in media and society; and I like underdogs when they're any good.

But I felt uncomfortable and somehow scuzzy after watching the documentary. I watched not because I really wanted to or because I wanted to put Israel down or for any other reason I could quickly identify except perhaps that "collateral damage" and "righteousness" tend to nauseate me.

I watched, went to bed, and got up still feeling as if I had been slimed.

A friend put me on the track of my own failing. His experience, he said as an academic among other things, was that academics tended to be cowards more interested in their own status than in the truth. His was just a suggestion, not some off-hand piece of opprobrium.

But it made me realize how infuriated I can become when I consider a topic serious and those addressing the issue insist on injecting themselves into the argument/debate/discussion: I don't give a fuck who said what first, whose appreciation is more profound than everyone else's, whether someone's ox gets gored or elevated, whether a cause is righteous or not ... what I care about is the issue itself. What are its parameters and implications? All comers welcome ... those seeking to get credit or laurels, well ... go jerk off someplace else.

This is a failing on my part because every argument involves a choice of words and arrangement that is personal and to that extent, perhaps, self-serving. It is unreasonable to ask anyone to keep their self-serving demands to themselves.

And still, I hate it when I hear the overt or sub-text bid for acclaim when the topic -- the death of children, for example -- is serious. I react viscerally... and pay the smelly-sock price.

Oh well, maybe I will be more patient and understanding in another incarnation.

But in the meantime, it seems that I am infused with a growling memory of Voltaire: "May God defend me from my friends: I can defend myself from my enemies."
Posted by genkaku at 9:01 AM