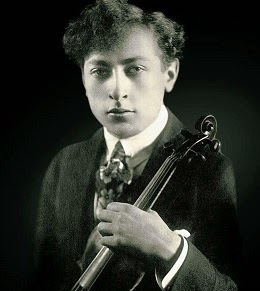 Given my lifelong personality traits, I suppose the hook was perfectly baited ... a Public Broadcast System presentation last night of "God's Fiddler: Jascha Heifetz." I can be enthralled by beauty, by music and by classical violin. The documentary dangled all those elements.

I once went to hear David Oistrakh play solo in a UC Berkeley gymnasium. The music was so beautiful that for me it was like staring at the sun ... I had to stop listening ... the alternative was to die through and through and I wasn't ready for that. "Enthralled" and miles beyond enthralled ... it was a blessing, a curse-laced realm: It was ... it was ... what it wasn't.

The documentary (provided in the PS below) on Heifetz (1901-1987) seemed to creep up on me and I despair to talk about it without offering the evidence of the documentary itself. The film does not yet seem to be available on the Internet and thus allow people to see for themselves if my pool of wonder and horror were warranted. I hate leaving out evidence, of telling (pablum reviews) without daring to show, but at the same time the program and its impact linger like a glimpse of God and/or a one-way ticket to hell offered in a seamless, undifferentiated land.

It's just a documentary, for heaven's sake!

But as I say, the hook was perfectly baited and I watched with mounting love ... it was horrific beyond naming and I could not avert my eyes. It was as if the light-drawn moth had indeed flown into the flames without finding the release of death.

Fractured memories of the documentary remain.

-- Of a man who had two failed marriages and three children he never paid attention to after the divorces.

-- Of a frightened boy, 10, left alone for days at a time by his father in a St. Petersburg apartment ... told to hide in a cupboard if anyone knocked ... brought to St. Petersburg from Vilnius because the great musicians were in St. Petersburg, although his mother said he was too young to leave home for tutoring.

-- Of what he told one associate was his greatest concert -- playing for a single soldier who stood beneath an umbrella in the pouring rain on a World War II battlefield: Just one person who dared the rain as Heifetz himself did. Of fellow violinists and acquaintances, all of them perceptive and in some cases accomplished, who tried their best to describe and remember and yet were so palpably inept even as they tried to put a good face on it and bring credibility to their praise and blame ... but it was like water off a duck's back ... beauty and art have no time or space for "genius" ... what a mockery that would be.

-- And of an image, somehow, of a man entering a crystalline city of soaring towers where he made a meal of those towers ... but every bite sent rending, slicing, tearing shards sluicing into his being ... killing him slowly and without regret and there was no turning back, no reprieve, no consummation because this note, this moment, was the consummation and no one of a sane mind would ever say so.

Maybe I will have the courage to watch this documentary again when it becomes available.

PS. Well, as expected, someone put it on the Internet later in the day and I watched it all over again ... and wondered what I had gotten so excited about ... a very odd sensation. Soaring is, in the end, just another form of flight.