visit from a turkey buzzard 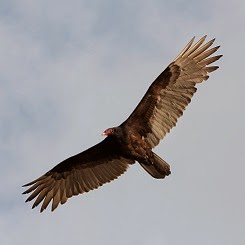 Even with the whistling fury abated, still yesterday's turkey buzzard floats and banks in my memory.

It was late afternoon, a time when the grackles -- or whatever they are ... the birds that crap on cars -- generally coagulate high in the as yet-unleafed branches of a tall tree across the street. I always imagine them convening prior to calling it a day, heading home and pulling the covers up around their ears. But yesterday, with the clouds scudding and the winds flexing their muscles like the precursor to some tragedy in an Oklahoma trailer park, there was no convention. All the birds were gone, by sight and sound. The wind, like Poseidon, ruled the realm and and roared ... and all the fishes were silent.

And there, alone in a place between playful and regal, a lone turkey buzzard seemed to make a playground of acrobatics ... floating on one invisible wind hillock or another, then sliding gracefully and at whooping speed to the left or right or straight down until it was time to lift once more, rescale the heights and begin again.

Turkey buzzards are not part of the neighborhood landscape in general. They can be found at the town dump further to the north, eeking out a living on what they do not consider "waste," but around here, it's sparrows and woodpeckers and crows and robins and cardinals and blue jays and an occasional red-tailed hawk. Turkey buzzards are a rarity, like some poor relative who lives in Kentucky and shows up once-a-decade for Thanksgiving dinner ... or perhaps a god who does not mix with the hoi polloi.

Whatever the truth of the matter, this turkey buzzard owned the skies that were to rambunctious, too dangerous, too threatening for more cautious, safe-sex, and cowardly customers. Swoop and bank -- the owner of all s/he surveyed, the last child on a richly-appointed playground, the last (wo)man standing after a furniture-splintering barroom brawl.

His/her flight path was playful and yet regal. S/he didn't seem to be hunting prey on the earth below. S/he seemed to be laughing a laugh no one else dared to laugh -- calling on the heavens to do their worst: S/he was ready...

Ready to laugh some more.
Posted by genkaku at 7:22 AM