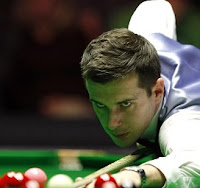 An entire news story, as near as I can see, in which the winner was lauded and the play extolled but the name of the game went utterly unmentioned. A lot of sports writers seem to take that liberty, which makes me wonder why they should consider themselves adequate news writers.

Not until the commentary at the end of the story did I learn:


Former world champion John Parrott on BBC Two: "That was one of the finest games of snooker I've ever seen. The evening session really was snooker from the gods. Everything about that match from both players was just stupendous. It's going to be hard to top a final like that this season. It really was that great."