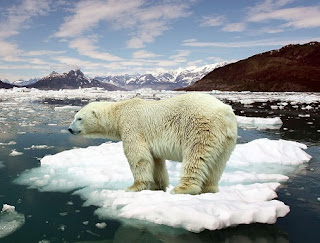 Yesterday, I whipped out a newspaper column that focused on the columns I had not written in 2016. It was the best I could manage. Where have all the ideas -- and more important the succulence with which I could imbue them -- gone? I feel like one of those p.r. pix for global warming ... the polar bear standing on a great slab of broken-away ice. Nothing but water in all directions. I can't seem to find the caring and the oomph.

Not that I begrudge anyone else their cares. It's just that I can't seem to find them any more. The importance, the meaning, the associations and hook-ups -- all of it has a slightly vapid feel: Do I really need to follow that train of thought? Why? Isn't the richness rich enough without investing it with richness?

There was a time when I would lullaby myself to sleep with one thought-weaving or another -- some spiritual or sociological skein perhaps -- but now I drop of the cliff without any humming necessary. Only god can pray to god, so it seems sensible/inescapable just to let the prayers be spoken without my lookit-me additions.

It's kind of strange and vaguely lonely, but it seems to be the way of things.

Once, when I was acting as an intermediary between a Smith College student and my mother whom the student wished to interview about one of my mother's novels, I asked my mother how she felt about the interview. My mother was hard of hearing and it was a long time since she had written and won an Edgar for "The Horizontal Man," a book many considered a roman à clef about the college. When I asked my mother about the interview, I thought she might play the age card as she declined. Instead, she took another tack: "I can't really remember what it was about," she said simply. She knew she had written it. She knew it enjoyed a small patch of literary sunlight. But ... well ... what was the fuss about?... I can't quite remember.

A column should bear some stamp of "importance" or "meaning" or "relevance," right? But now there is more water and less ice. An odd kettle of fish.
Posted by genkaku at 6:46 AM