the serious and the silly

Just a couple of sillies in a world full of solemnities: 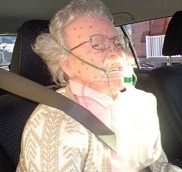 -- Police in Hudson, N.Y., got whip-sawed into breaking into a car where an overly-realistic elderly woman had apparently frozen to death in the latest temperature tumbles. The woman turned out to be a dummy/mannequin. The owner was pissed. The police issued a statement reading, "Just to clear the record, all citizens of Hudson should be put on notice that if you park your locked vehicle on the street on a sub-zero night with a life-size realistic mannequin seated in it... we will break your window."


-- Hundreds of Australians have gathered to roll on the lawns of Parliament House in Canberra, in protest against plans to build a security fence there.
Under new anti-terror measures, a 2.6-metre barrier could soon block public access to the much-loved grassy space.
The mass tumble took place on Saturday morning, after news of the event spread on Facebook....
Mr Broad said that while he has not indulged in a hill roll since he was a child, Australia's leaders should consider taking part.
"I reckon at the end of the year that'd be a good look; all the pollies [politicians] finish the parliament with a good roll down the grass and tell people that parliament ultimately is about a bit of fun," he said.