Background on blackface [The Guardian]:


“America is a land of masking jokers,” the novelist Ralph Ellison wrote in 1958 in an essay on American identity. “We wear the mask for purposes of aggression as well as for defense, when we are projecting the future and preserving the past … the joke is at the center of the American identity.” 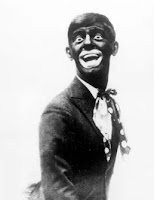 When white Americans dumped tea into the Boston Harbor, Ellison argues, they were wearing the costumes – the masks – of Native Americans; when white Americans wished to ease their discomfort with black Americans, they simply adopted blackness itself as a costume, a clown suit, attempting to at once crudely mimic African Americans through stereotypes and to create a caricature that could be easily laughed at and spoken down to. It was an act of both offense and defense: an attack through derision, and a kind of psychological defense against a deeply feared group. The entertainer in blackface – even when it was a black American forced to put on blackface makeup – “is [always] white”, Ellison noted.
At the height of its popularity in the late 19th century, seeing white performers adorned in coal-black makeup, woolly wigs and outlandishly red lips was one of the most beloved pastimes for white American families.

My now-dead friend William B. McKechnie III once told me that when his mother was little, the kids might go down to the local insane asylum and peek in at the crazy people and their crazy stuff. As ever, the habits of the past may seem antiquated and even cruel and yet there they are looking out of our very own mirrors. Blackface may make today's white man cringe, yet imagine how much worse than cringing the black man's burden was to bear.