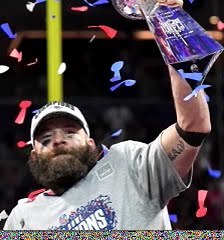 Yesterday's game between the New England Patriots and Los Angeles Rams had a foregone conclusion (Pats 13, Rams 3) and all the excitement of flour and water. A defensive game. Millions and millions of dollars spent on advertising. Four or five guys parsing every inch and tactic and ... well, they had a job, I guess, and advertisers were happy.

If I don't write it down, I'll never remember who even played in the game, which is not their fault, but mine.
Posted by genkaku at 10:25 AM