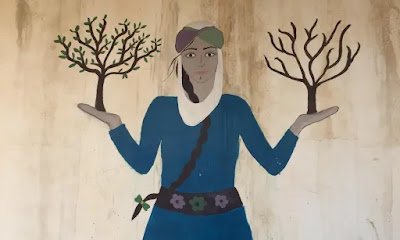 A mural in Jinwar. The female-only commune in north-eastern Syria opened in November and is home to Kurdish, Yazidi and Arab families. Photograph: Bethan McKernan/The Guardia"
Does anyone else out there find their been around-the-block-teeth itching at the mention of one-pointed organizations?

Does anyone else get a case of itchy teeth when someone posits a [fill-in-the-blank]-only way of seeing or building anything? Isn't whatever it is -- women-only, men-only, peace-lovers-only, greed-merchants-only, children-only, Christians/Jews/Muslims/Buddhists/Hindus-only ... pick-your-only ... isn't that which proclaims its only-ness doomed to dissipate from the get-go? And I mean anything?

All the reaoning and excuses in the world can't right this ship. I might love the idea of a women-only commune, but I'm sorry, it won't wash and it won't wear. I love the effort, but I cannot and will not pretend that the future is any different from the myriad futures that preceded it.