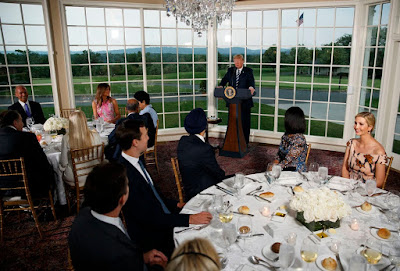 At the same time that U.S. President Donald Trump thunders and berates for a border wall between Mexico and the United States (criminals, drugs, sex slavers and other undesirables are taking American space, don'tchaknow ... at the same time he vows to re-empower a working class whose work has been drifting away ... at the very same time ... construction workers are out of jobs that might pay $50 or more per hour, illegal Costa Rican immigrants laborers earning $8-$10 per hour have worked on President Donald Trump's golf course in New Jersey, according to the Washington Post.

The story needs editing -- or maybe my mind does -- but the smell of bullshit and hypocrisy and feudalism is overwhelming. What a disgusting little man.

How do people -- "the base" they keep being called -- keep loving a man who takes their jobs, impoverishes their families, undercuts their medical care and the best he can do is to call another raucous circle-jerk of adulation where everyone agrees to be angry or victimized ... though not by the man doing the victimizing.