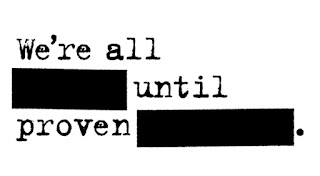 Is it coming to a time when guilty-until-proven-innocent is slowly replacing the once sacrosanct (if fabulous) innocent-until-proven-guilty?

Lord knows the Catholic church and its child-sexual-abuse coverups (since way before 2012) deserve a long period of sunlight after years in the convenient, holy-roller shade.

But I wonder about the politicians and other power-brokers who have seemed immune to sexual assault charges ... but now decide to exit the stage at the first hint of accusation. Investigations take time. Accusations are a quick-hit.

Is a randy teen-ager the same as a grown man/woman? So many of the accusations seem to relate to times when idiots-R-us ruled the roost. This is not to say that damage is any the less as far as victims are concerned. But is now the time to initiate a flying-squad investigative unit to sort things out?

Perhaps the divide is just too ingrained:

"Guilty until proven innocent" relates to you.

But "innocent until proven guilty" is something I would prefer be applied to me.