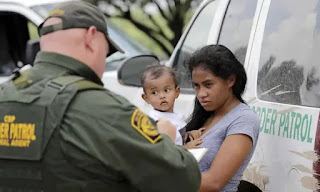 Lawyers for eight immigrant families separated under Trump administration policy have filed claims against the US government, demanding $6m each in damages for what they describe as “inexplicable cruelty” and lasting trauma.
In claims filed to the Department of Health and Human Services and the Department of Homeland Security, released on Monday, the parents accuse immigration officers of taking their children away without giving them information, sometimes without even a chance to say goodbye.

Of all the heinous crimes that may be laid at Donald Trump's doorstep, the separation of Central American children from their mothers/families as a caravan heads north to the United States strikes me as most excruciating. A vile liar activates a vile lie and the United States is held hostage to those lies. Is this who the United States is -- turning away a crowd whose members may, but are seldom proven, to have criminals in their midst. The bottom line is purely visceral for me: How would I feel if someone of greater power took one or more of my children? Frankly, I would want to kill him/her/or it. Poor people often have little and are known to be devoted to their families ... and now this????? And the reasoning comes from a man who routinely fabricates facts and disseminates fictions. The same man who claims to be a good business man and yet paid over $200,000 as fallout from two sexual encounters?

Rabid dogs are frequently shot dead.
Posted by genkaku at 9:51 AM