In an early colonial compendium of good manners was a phrase that stuck with me:
"... and if you must spit, spit in the corner." 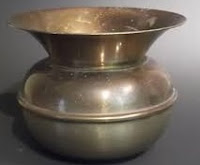 At 80, I can see what I never did at 40 -- the usefulness of spittoons. I know sports guys and possibly duck hunters spit a lot, but spitting as a manly or polite way of conducting life just never seemed to cross my bow outside a spitting contest with the black smith who visited and did the shoe-ing at the school I attended when young.

Is it too soon or too arrogant to raise up yet another cry/whinge/plaint "Bring back spittoons?" Or does it clash too forcefully with the bling nation we are being weaned away from as the flu epidemic drowns the world?

By deploying troops in Portland, Ore., as of late, Donald Trump has substituted his brand of fascism for Bernie Sanders' unexamined "socialism." Just a quirk, I suppose. I think Trump had always wanted a fascist role model, but I think he struck too soon. There's too much push-back. Yes, the lords will be lords and the peasants will be relegated to the role of peasants, but will Trump emerge as the latest Duce?

Someone has to give Trump a door to walk through ... to lose the presidential election Nov. 3, while seeming or claiming to win. This is spittin' material, I wot.
Posted by genkaku at 10:19 AM