bustin' up the neighborhood 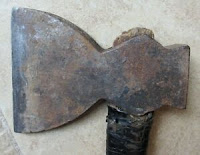 There came a day in the mostly-forgotten past, when Hershel, the Korean 'War' (it was never declared as a war and remained a 'police action') vet with a limp who used to live across the street, seemed to have skipped his meds and in an apparent fury, attacked his neighbors' front doors with an ax.

It was the news of our lily-white neighborhood at the time. I missed it all because I worked a swing shift and was sleeping. Hershel hit my neighbor to the south and my neighbor to the north. For reasons I'll never know (perhaps because I once took him some brownies at Christmas... maybe because we occasionally talked books together), my front door remained untouched, un-axed.

Someone eventually called the cops and they took Hershel away. They rebalanced his chemistry. His limp remained the same and his furies, of whatever sort, went untended, I guess. But Hershel's ax cut a hole in the ever-widening gentrification of a neighborhood that was once agricultural and salty with sweat and, dare I say it on Hershel's behalf? -- honesty.

Time passes. Hershel got stuck in someone's kind-hearted loony bin. He had been sent off to war and came back with the marks of war ... dark scars. Men like Donald Trump thrive on guys like Hershel.

Was there ever a greater anti-war plaint than

"I sent them a good boy, and they made him a murderer," cried the mother of one of the soldiers at My Lai (My Lai Massacre 1969).

Imagine! A mother says that about her son! Nine months in the womb. Subsequent years of nurturing and hoping a praying (just like any mother) and some blue-suit, big-mouth, blow-hard ... god, it defies descriptives!

A sense of shame is useful as events wisp off into forgotten-land.

Across the street, a lawn sigh proclaims "you are loved." The sign is part and parcel of Pat's Christianity and, perhaps, kindness.

My sense is that it is best to keep religion out of the business of 'healing.

Just because everyone agrees does not mean something is true.
Posted by genkaku at 11:07 AM