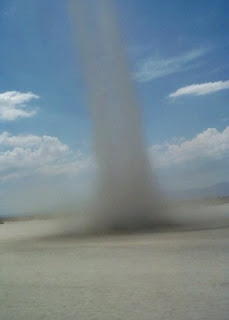 Today I pray for a faith I do not have, for pots and pans I do not own....

On a trip to Russia in 1968 -- the 50th anniversary of the Glorious Russian Revolution -- I met a man, Dr. Haddon Alderton, who had lived among an Australian indigenous people called the Arunta. Alderton was in his 70's, an old-line socialist, I suspect, and the two of us took to having lunch together on the Prince Yuri Dolgoruki, a ship sailing down the Volga River. Alderton was full of tales and I was all ears.

Among the customs of the Arunta, according to Alderton, was one in which, when the micro-tornadoes kicked up on the Australian sands, tribesmen would leap into the middle of the dust and bang pots and pans as a means of dispelling the malevolent spirits believed to inhabit them. These dust devils, prevalent in so much of the earth, were called Willy Willies.

Evil everywhere, stinging the eyes, scoring the skin with a thousand small cuts, palpable but without handles ... drowning, fighting what cannot be other than a losing cause and yet fighting anyway. If pots and pans will do the trick, fuck it! use pots and pans. But of course there is no "trick to it."

Yesterday, my younger son galumphed through the front door dressed in camouflage fatigues and burdened like a Mexican burro with rucksack and other military paraphernalia needed for the two weeks of Nation Guard training he had just completed on Cape Cod. He looked big and bold and I was glad to have him back.

How was it, I asked. And he said it was mostly boring. He gave few particulars, which I figured was his prerogative, and then got around to his big news: His unit had been selected for "deployment" in 2017. It wasn't entirely clear where he would be stationed -- the situation in that part of the world is "fluid," to use the kindest possible word -- but for the moment, the south of Egypt was on the drawing board... as a 'peace-keeping' force, he scoffed. What ticked him off was that he would not receive either a unit patch to designate fighters nor was there any chance of being awarded the Combat Infantryman's Badge, the medal indicating that he had been where the bullets flew in earnest. Peacekeepers, of course, stand as good a chance of being attacked as any other, with or without the medals.

Nothing is fershur. It's all in a two-year offing. And I found myself in the middle of a dust storm, searching for pots and pans that wouldn't do any good if I had them. First and foremost, perhaps, is the fact that my son has always been drawn to the military. Never mind the psychological parsings -- it's just a fact and if you stand next to the fire, you're bound to get burned.

But I don't care if my son's outlook rests in a lack of information or a search for camaraderie or a sense of patriotism ... the dust around me fairly wails. To die on your own terms strikes me as OK. To die on someone else's terms -- notably the policy wonks whose war mongering hides behind American flag lapel pins -- is enraging, stinging ... and I want to hurt someone ... but of course there's no one to hurt ... those fuck-heads!

The fact that the deployment is two years out tells me that those seeking "peace" have every expectation that they will not achieve the peace they claim to seek. Instead, they dote on their policy-wonk achievements and look for more: It's good business.

The only reasonable thing I could tell my son was to learn a little Arabic. "It may save your life or the life of your buddies," I said. He looked at me with eyes that said he would never do it ... what was book-study compared to the barrel of a peace-keeping gun?

What could I do? Where could I turn? What pots and pans could I bang as a means of quelling this stinging projection in my mind? I tried on several simpering Buddhist nostrums and lenses and found that they just increased the force of the wind and sting... keep that shit out of my face! Take your TED talk and shove it! This is my son ... my son ... and of course it is your son as well. I am sick of people tempting death like some scaredy-cat Ernest Hemingway facing the ferocious beast as a means of expressing the blessing and wonder of life.

No matter how loud I scream, the dust devil's scream outflanks me.

But it's horrible enough.