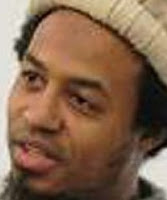 Another example of penalizing a person according to what he MIGHT do? ...

A former U.S. Marine who became a Muslim radical, gang leader and bodyguard to the blind sheik behind the 1993 World Trade Center bombing is so adept at turning fellow prisoners into potential extreme jihadists that Florida prison officials have kept him in shackled and in solitary confinement for the last three years, and federal authorities want a judge to tack on another three decades. ... The U.S. attorney is using the Foreign Intelligence Surveillance Act to seek an enhanced sentence for Robertson.