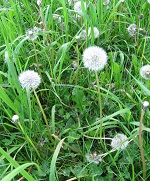 Yesterday, as I was weeding around a decorative rock that marks the sliver that might be called a front yard here, I heard a woman's voice behind me saying good morning. It was a tentative, polite voice and I turned to search out its owner.

"Do you have any old metal stuff you want to get rid of?" the woman asked evenly. "My son and I are scrapping."

I answered that in fact I probably did have some worn-out metal odds and ends, but added the truth, which was that it had cost me something to get down on my knees to do the weeding and if I got up, I was afraid I would not have what it took to finish the small chore I had set myself.

The woman, in her 50's, perhaps, or perhaps a frazzled 40's, understood completely.

"Would you mind if we came back at another time?" she asked. And I replied warmly that I would not mind at all.

At any other time, I would have been off my knees in a shot. Begging is not easy and I don't like to see anyone in tightened straits, but at the moment I simply didn't have what it took to meet the obvious and touching need. At any other time, I would have felt a twinge of guilt at having turned her away, but somehow yesterday, I didn't. I had told the truth, she had heard that truth and we were parting as what I imagined was friends.

Old age, like begging, makes its demands and patience is one of them.

The matrix of her request freighted her words: Northampton is largely a lily-white community with an I-deserve-it outlook and sensibility. Relatively speaking, there is plenty of money, so people can take an interest in things like creating a road crossing for migrating salamanders. The pressures of poverty are best observed over a glass of white wine. The dirty hands of "scrapping" are washed in anti-bacterial soap. It's well-intentioned, perhaps, but good intentions don't put spaghetti on the table or keep the well-scrubbed bill collector from the door.

I don't really feel the impetus to turn all this into some economic-inequality screed. There's plenty of that available elsewhere. What interested me in the situation was a strange, momentary sense of kinship and family.

It was a little like the feeling that arises in a community snookered by a power blackout or a walloping snow storm. Suddenly, everyone gets a little more understanding about others. The number of crabby drivers flipping each other the bird diminishes. People passing in the street may not say hello, but they look at each other and smile perhaps ... a warmish smile that was not there when the lights were on or the roads passable.

It all seems to say, "We don't need a self-help talk about how we are all connected one with the next. Here is the connection in real life. TED-talkers and pulpiteers can take a hike." Things are looser and warmer and less-contrived. Also, in some way that cannot be proved or defended, it is simply more true.

Nor do I wish to elevate the scratching, searing realities of hard times. Hard times are hard and trying to make lemonade out of lemons is a pastime for those well-enough-fixed to envision a salamander walkway.

But hard times can scrub away some of the social callouses that keep others out even as they hem the calloused in. When the storm hits or the lights go out or the scrubbed bill collector comes calling, the fragility that is as much a birthright as any other gets a chance to breathe and relax and claim its rightful place.

The beggar and the rich man are fragile. But scrappers are also scrappy.

The old dude weeding is fragile. But he is also doing a creative job anyone might likewise do.

It is a mutual fragility and a mutual ability that is every bit as compelling as the wondrous strengths that lemonade can provide.

In the blackout we can smile or -- who knows -- perhaps even sing.