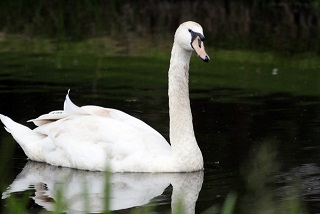 Is there any place the swan does not swim? I don't think so.

In Hinduism, there is a metaphor about a magical swan that swims on a great ocean. It is magical not least because swans (in reality) are as crabby and combative as geese and this swan is thoughtful and wise. But its central magical power in the Hindu telling is that this swan can extract a single drop of perfect and nourishing milk from the great sea on which it floats.

Pretty kool trick, don't you think? Getting to the good stuff, the nourishing stuff, the wise and compassionate stuff while floating in or on a vastness of what can be conflicting and confusing and sometimes painful input. The bumper sticker sums things up: "Shit happens."

Of course it's not always shit. There is nice stuff too. But the shit seems often to grab the marquee headlines. Death, disease, drugs, divorce and delight ... a small, alliterative litany.

First come the fireworks of love or anguish or satisfaction or dissatisfaction. The swan swims in high seas. But after that -- in more ordinary and less provocative circumstances -- there are less boisterous times, times in which anyone might resign themselves to sleeping in the bed they lay down in: It may not be Nirvana, but, well, "OK, I'm down with that."

I'm down with that but the swan's magical capacity goes unfulfilled. It's a small nag, perhaps but it can be papered over with, "Everything is a compromise" or "into every life a little rain must fall" or, less politely, "read 'em and weep." Who knows, maybe the swan is just some juvenile, spiritual wet dream ... get used to it!

It is simultaneously strange and yet utterly comprehensible that people should gather together on behalf of the swan. It's as if snuggling one by the other might reassure each that, no, you're not out of your mind to long for some swan, some apogee, some relaxed and relaxing understanding that brooks no doubt. Social critters gather together. That's what they do. And they do it even in circumstances where no amount of socializing can ever extract a drop of milk.