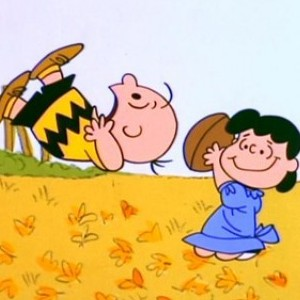 Every year, year after year in its heyday, the cartoon strip "Peanuts" would depict a situation in which a crafty little girl, Lucy, would invite the good-natured Charlie Brown to punt the football. Based on past experience in which Lucy had pulled the ball away at the last moment, Charlie Brown would be reluctant. Yet in the end, after some cajoling, he always tried again ... and Lucy always pulled the ball away again.

Yesterday, I received a series of questions about (Zen) Buddhism. The writer, a high school senior with a homework project, is an intelligent young woman. Her thesis as stated for her paper was this:

According to anthropological theory of religion, Buddhist meditation serves Buddhists psychologically by fortifying will power, increasing self-confidence, providing mental tranquility, freeing the mind from worry, and promoting virtuous qualities like compassion, wisdom, and tolerance. Meditation also serves Buddhists intellectually by increasing awareness of inner potential, helping with concentration and organization in daily activities, and developing the mind so that it can work at its full potential.

Following this mission statement, there were a series of questions -- things like, "when did you get involved," "what did your teachers teach you," "how does your religion differ from other religions" and so forth. The last question and the one for which I gave a very high mark was, "do you agree with my thesis."

I tried. Honestly, I tried. But the plain fact is, I failed. I am too embarrassed to reprise my answers here, but I knew I failed ... though it wasn't for lack of trying. The thoughtful summation the thesis offered was perfectly acceptable and perhaps commendable in academic terms. But I simply could not turn back the clock, fall into the socially-pleasant realm of question-and-answer ... I felt as if I were being asked to walk on water when, except for the world of marvel and credulity, such a thing is not possible.

There was a certain sadness to it all. I wanted to help someone with her homework ... and I just plain couldn't. I am no teacher of learning, though I know plenty who are more skilful than I. Let them do it. Reasonable answers strike me as weak-kneed and off the mark, not that unreasonable ones are much better.

An example: "When did you first become involved in your religion?" This is a perfectly reasonable question, one that relies on recognizable chronology that any reasoning person can get his or her head around. So ... tell me when something began. And in one sense, I could probably say, "It began in 1970" and the interviewer would walk away content. Questions have answers, answers answer questions. All very neat and complete. The fly in the ointment is that, with practice, it became perfectly apparent that the answer was neither complete nor accurate. Experience taught that without 1969 or 1968 or 1967 or 1966 or whenever, beginning in 1970 would not answer the question at all. Experience taught that I became a Buddhist because I had a blue tricycle when I was little ... and even that doesn't really wrap up the case.

So I tried to answer the question as honestly as I could ... and failed to assist the person doing the homework. The truth, or whatever version of it I could muster, was too vague, too unresponsive to a reasonable question. The football got pulled away and Charlie Brown went sprawling not because of any wicked intent, but because ...

Well, because there was no other choice. Or, no other choice for me ... I recognize that others may be capable of reasonable and coherent and apparently-responsive answers.

I can remember sitting at an informal in the Zen center I once attended and thinking to myself, "Will someone please just tell me what I want to know so I can get the fuck out of here?!" A reasonable, if cranky, request ... to which, of course, there was no reasonable answer that meant much.

It really was embarrassing, trying in vain to be responsive yesterday. I like to think of myself as a fairly reasonable person, someone given to reasoning and yet...

Year after year the Lucy of reason convinces me to try to kick the football ... and year after year, I end up on my ass.

The old British comedian Benny Hill once did a send-up of Edgar Guest that seems to state the case wonderfully:

THEY SAID IT COULDN'T BE DONE
by
Benny Hill

They said that it could not be done,
He said, "Just let me try."
They said, "Other men have tried and failed,"
He answered, "But not I."
They said, "It is impossible,"
He said, "There's no such word."
He closed his mind, he closed his heart...
To everything he heard.

He said, "Within the heart of man,
There is a tiny seed.
It grows until it blossoms,
It's called the will to succeed.
Its roots are strength, its stem is hope,
Its petals inspiration,
Its thorns protect its strong green leaves,
With grim determination.

"Its stamens are its skills
Which help to shape each plan,
For there's nothing in the universe
Beyond the scope of man."
They thought that it could not be done,
Some even said they knew it,
But he faced up to what could not be done...
And he couldn't bloody do it!