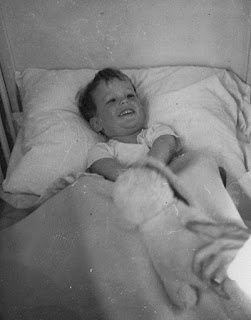 And then, the other day, there it was, up out of one of those million million albums -- a picture of me as a small child. I recognized it immediately, not so much as me, but rather as an example of a picture in one of those million million albums. It was a recognition of humanity -- instantaneous and touching -- and yet in this case I had irrefutable proof -- a photo of me as a guileless, trusting, happy, wide-open being... free and easy as a puff of wind over a still pond. There was no escaping it and it shot through me like an ice pick.

All of the congealed guile or fumbling understandings I had learned between that moment and this were somehow put to shame. What I wouldn't give to give with as much freedom as I had in that photo ... with all the unfreighted easiness of a dog's wagging tail. But simultaneously I knew without knowing ... if you did it once, it was never lost and the capacity to do it again was always there.

None of it had any of the smarmy lubrications that oil up phrases like "be as a small child." This was more direct and factual and inescapable and unwilling to be conned.

So much time, so much energy, so much bobbing and weaving, so much decency mixed with congealed wile ... and I would trade it all in a nanosecond for the nanosecond that was in that photo... a photo that appears in a million million albums around the world.

Sometimes I think that haunting is not so bad after all.
.