a return to public hangings?

Everyone has a breaking point, a point beyond which they simply cannot go or survive. Too much pain, too much sorrow, too much shrieking helplessness. It's human and it's too much. Others may wonder or analyze or dissect or prop up their own sense of being in control, but "too much" is simply too much for the person who feels it to be too much. The handholds have disappeared and gravity has lost its force and what held us fast has evaporated. Too much.

One hundred and fifty-four military suicides have been reported in the first 155 days of this year ... and "far outdistance the U.S. forces killed in action in Afghanistan." Those with a need to explain point to multiple deployments, drug abuse, post-traumatic stress, and financial difficulties as possible culprits or causes. 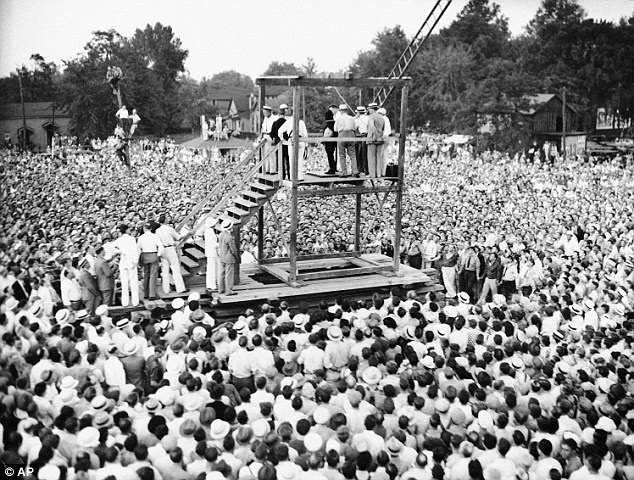 Perhaps the problem could be mitigated if, for every military suicide, one member of Congress, chosen at random, were publicly hanged and the hanging were carried live on the six o'clock news. It is those for whom life is not at all too much who send others into settings in which a Harvard or Yale or Stanford education might easily suggest that life can become "too much." It is after the fact that those so well and lovingly educated turn their backs on their own collusion in the suicides they may deplore with oozing care and concern ... as if they had had nothing to do with the deaths of their country's sons and daughters. A Harvard or Yale or Stanford education can provide some wondrous evasions.

The wealth of the wealthy is amassed according to the poverty of others and sometimes that poverty proves to be "too much." And then, when that "too much" arouses the fearsome and furious beast of resistance, the wealthy may ask with an innocence and outrage that sidesteps responsibility, "Who, me?!" Perhaps a banker or stock broker too could be chosen at random for a six o'clock news segment.

The Somali security official -- without benefit of Harvard or Stanford or Yale education -- was correct when he observed in connection to the rise in piracy off his shores: "If you do not share your wealth with us, we will share our poverty with you."

And the priest-abuse depredations of the Roman Catholic Church come to mind....

Public hangings are barbaric no doubt -- a real descent into realms no one wants to descend to. They are "too much." Too fiery. Too uncivilized. Too deleterious to the self-image of a civilized constituency that has yet to acknowledge its own "too much."

And yet there are times when the wanton blind eye -- so civilized by education and surroundings and accolades -- becomes, in its own way, "too much."

Capital punishment is not something I favor. Aside from anything else, it demeans the executioner in ways that no (wo)man (or member of the armed forces) needs to be demeaned. It does not diminish crime. It serves as no example whatsoever to those who perpetrate crimes and for some of whom life may be "too much."

Yes, public hanging is demeaning and unwholesome and barbaric ...

And there are times when a small voice whispers, "I am willing to be demeaned."
.
Posted by genkaku at 9:17 AM