tending the flock ... sort of 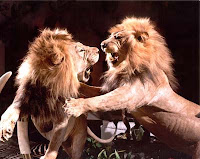 On the one hand, these are not battles for sissies. They are serious, pedal-to-the-metal fights. But, if I am not mistaken, there is this to note: However serious the fight is, generally it is not a fight to the death. The fight goes on (and maybe this is true for elk, moose, mountain goats and whatever other species) until both parties reach an unspoken agreement that one animal is dominant and the other animal acknowledges it. It's as if a contract were signed and the contract read: "We both belong to the lion family and we do not heedlessly kill our own, but in this instance, I am bigger and badder than you are."

If you ask a political system or a religious organization to enunciate the foundations of its work, one of the forthcoming answers might be that each is nourishing, protecting and advancing the interests of its flock. But, since each is in a bidding war for the belief and trust and money of often-overlapping flocks, there is a likelihood that they will come to blows. Governments recognize the potential undermining effect that belief in some power other than its own can have. Communists have tried to squelch religion entirely on this basis. Organized religions, for their part, recognize that the belief in and crediting of an authority beyond the earthly realm is essential to maintaining their income and importance. The religion of the intellect might like to remain outside this fray, but I doubt that it can do so.

Yes, both would probably maintain that they are tending their flocks. But simultaneously they both can recognize a fellow player in the game of power. They are lions. The tussle and roar ... but they never strike a fatal blow. Perhaps this is because a fatal blow is impossible, given human nature, but perhaps as well it is the recognition that they are fellow power players, fellow lions ... and the power aspect is an aspect that needs to be preserved if the ruling lions are to dine on humming bird tongues and wear brocaded mitres.

The question that crosses my mind in the midst of this broad-brush, amorphous theorizing is this: When two entities, each alleging its beneficence on behalf of a flock, come to blows ... what happens to that flock? In the heat of battle or in the throes of delicious powers, what becomes of the flock that makes that power powerful in the first place? Power needs to be audacious -- that's part of the reason it's powerful. And yet too much audacity tends to come around and bite the audacious one on the ass. Best to fight hard ... but not to the death. We're all lions here, after all.

I guess this train of thought arose out of the Vatican's vain attempts to assert its dwindling power in the face of a priest sexual abuse that its true and credulous power base finds viscerally heinous. I guess it also arises out of the distemper of the American electorate when ingesting the flailing promises of its political leaders. When the flock finds itself undernourished and underprotected, the reasons for raising the powerful up diminishes.

Not to the death, of course.