.
Yesterday, when I found out the column I had written was going to appear in print, I told my younger son about it and said I felt a bit as he might have felt in the past when passing in a written assignment ... that I had done what I could, that I felt that it said what I wanted ... but I wasn't entirely sure what kind of grade I was going to get.

He listened patiently, as children are wont to do when they know they cannot escape a parental outpouring of one kind or another.

But when I mentioned the subject of the column -- Vatican sex abuse -- his face closed and he waved his hand dismissively. "I don't want to hear about that," he said. I didn't begrudge him his conclusions, whatever they might be, and I wasn't going to try to browbeat him into seeing things my way, but the dismissiveness disturbed me.

Later, when I had chewed my cud about it a little bit, I went back to him and said, "You know, a man who cannot examine his own conclusions is doomed to remain a boy. There is nothing saying you have to agree with anyone else, but for your own happiness it makes sense to find out if you agree with yourself." And I went on a bit in this vein. 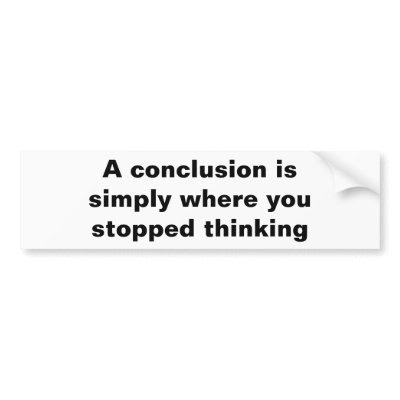 It's a funny thing about conclusions. They can be so comforting, so defining, so home-is-where-the-heart is. Sometimes they rely on similarly held conclusions that others espouse: I'm right because a lot of other people think so too. Sometimes they are just flat-out reactions: I hate anchovies. And sometimes they are examined to a fare-the-well, picked over, dissected, rebutted and reaffirmed until, voila! -- Republicans are fear-mongering, pusillanimous, war-prone nitwits; or Democrats are comsymp sissies intent on driving the republic into a spineless and impoverished future.

But it's like nailing Jell-O to a wall. No matter how much or how little anyone thinks something through, still there is a conclusion, a point at which the nose-picking ends because ... well, there just don't seem to be any more boogers. Of course there are more boogers -- always -- but the exhaustion factor kicks in and it's time to take a rest within the warmth of this conclusion or that.

So what I told my son was probably not entirely accurate. We are all boys and all men, all girls and all women. The stupidity attending on conclusions is probably inescapable and human.

And despite all that, I don't think I'll take back what I said to my son: Rolling a subject around in the mind, examining the bad qualities of what is called good and the good qualities of what is called bad, really is important. If you can't make peace with the downside of what you call "up" or the "upside" of what you call "down," how can your conclusion hold any credit-worthy water in your own heart?

Boy or man, no one ever gets it right.

But my conclusion is the same: Do it anyway.
.
Posted by genkaku at 9:28 AM