wrapping up the issue 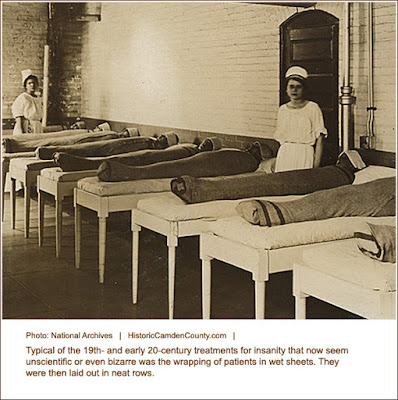 Like some earlier time when fractious psychos were wrapped in wet sheets, I have spent the last couple of days struggling to pin down and make socially-less-disruptive the soaring irritation I have felt when it comes to the Supreme Court's "Citizens United" decision of 2010.

The effort was in aid of a monthly newspaper column. Except in children and psychos, it really isn't enough and it hardly communicates much other than self-congratulation to soar and swim and swear about the deleterious effects of buying and selling political offices.

OK, it pissed me off. And the lightness of being that wallowing in pissed-offedness instills is hard to deny. God, it feels good and feels so convincing to feel something. To capture and explain a feeling is damn near apostasy from a feeling point of view: Feeling wants to, loves to, and demands to be heard and recognized and seen as true as true can be. That's the way it feels inside: True. It may be messy and confused and unfocused as a kitten in a ball of twine, but I just know it's true. Ask any teenager ensorcelled by true love or the revolutionary on the barricades and you'll know what I mean. It's clean and clear and true and I am dying to say so, to share and transmit and dance with others in this undeniable light. A veritable saturnalia.... It's true because I know it's true and it's true because I say it's true and it's true because there is no contradicting it.

But then, of course, the self-centered mish-mosh needs to be brought to heel if, for some reason, you want to transmit it. I may be convinced, but somehow I need to find the tools with which to transmit that conviction. Enter the wet sheets of language and analysis and logic... wrapping up tighter and tighter, shaping and stilling the flood waters, adding a format to the format-less.

And in much the same way that the passion can insist on going off some deep end of delight and certainty, so the wet sheets of argumentation can claim the day. It's so much easier to find an "explanation" or "meaning" or "logical progression." If I just explain with enough detail and with enough care -- if I just wind the wet sheet tight enough -- then the passion will be encased and not at all so higglety-pigglety. It may be juiceless, but my reasoning makes me less of a social wack job.

What impassioned person has not chafed or scoffed at the steady-Eddy questioning and probing and shaping of wet sheets? And what steady Eddy has not scowled at the flailing and volume of an impassioned soul who threatens to bring down a house of logical cards? Passion does not fare well within the enfolding sheets of "thoughtfulness," and thoughtfulness can turn into a flavorless addiction where, seemingly unbidden, laughter and tears start to flow.

I could feel myself chafing and balking and wanting to escape from a kindly-disposed ACLU lawyer who agreed to vet what I had written about Citizens United. He knew the law, he knew the tendrils, he wasn't about to lie down and spread his legs for impassioned conclusions based in self-congratulatory enjoyment. I needed him -- or at least his slow-down-and-take-a-look approach -- so as not to be utterly wrong or foolish-to-a-fare-thee-well. I wanted to get my point across, but I didn't want to be lazy. I didn't want to be lazy but I hated being energetic. Parsing and dissecting and adducing 'evidence' never stilled the liveliness of passion. I hated it ... and did it anyway.

Bit by bit, the wet sheets were applied to the column. And the result, when I finally gave up in disgusted exhaustion -- was somehow dull. Smart -- or smart-ish -- perhaps, but dull.

How I dislike mindless passion passing for truth.

How I dislike mindful argumentation passing for truth.

I guess I will have to learn to make my compromises ... about like anyone else.
Posted by genkaku at 7:27 AM