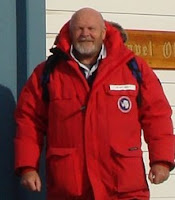 Budget cuts and a declining attendance has put the last Roman Catholic priest in Antarctica out of business.


Father Dan Doyle, who lives in Christchurch, New Zealand, would spend summers on the remote continent and serve the population in the area of about 2,000, the BBC reported....
He served a daily Mass, performed last rights and even a few baptisms. There are some religious constraints by living in the most remote corner of Earth. For example, you cannot be legally married or buried on the continent because no one country stakes claim on the land.

And Doyle once told an interviewer:


You think white is one color.... But white is a thousand colors when you get inside a glacier and it’s all around you.