the delicacies of slaughter 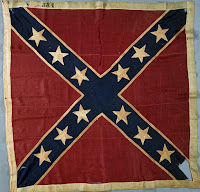 The Confederate battle flag has become a focal point in the wake of the fatal shooting of nine black people in a South Carolina church. It is easier to argue about a flag -- is it an implement of racism or is it an historical artifact -- than it is to enter the tortuous chambers of racism.

COLUMBIA, S.C. (AP) — The Confederate battle flag no longer flies at South Carolina's Statehouse, now relegated to a room filled with other relics of the state's secession. Other vestiges of the Civil War-era South are unlikely to vanish so soon.
Several states have taken or are considering action to remove the flag and other Confederate symbols and monuments since the massacre of nine people at a Bible study inside a black church; police have charged a man shown in pictures with the flag who they say was motivated by hate....
Still, the region is full of monuments to key players in the Confederacy and even the Ku Klux Klan. Confederate flags remain a common sight on license plates in the South, and the flag is a part of Mississippi's own state flag. Georgia's state flag is based on the national flag of the Confederacy known as the stars and bars.


In Mexico, the careers of Captain Lee and Lieutenant Grant intertwined for the first time. Each would later question his nation's right to invade its weaker neighbor [1846-1848], but at the time they welcomed combat as an opportunity for career advancement. Appalled by the carnage that they witnessed in Mexico, both Lee and Grant would strongly oppose the idea of war in 1861 [the beginning of the Civil War].

To oversimplify, no doubt, two men attended the same school whose axiomatic existence rested on the role war played in human interactions. Before the battle flags, before the patriotisms, before, even, the fashioning of racism in whatever format ... there was bound to be war. And perhaps, when it comes to such matters, the cart has been put before the horse and the argument advanced that because of patriotism or flag or even economic advantage, war is inescapable. Perhaps it is better to turn that around: there is war and only later are patriotism and flag and economic motives adduced to shore up and excuse its horrors.

Do military personnel "fight for flag and country?" I doubt it. I challenge anyone to find a combat soldier who has been where the bullets flew and fought to shore up some abstract concept. I imagine they fight to stay alive and to help their nearest companions to likewise stay alive. The whole situation is too searingly insane to inject patriotic or flag-waving nostrums. That stuff comes later -- in the run-up to the next war planned by those whose skills are exhausted ... the old and well-manicured whose children are unlikely to be touched by the inescapability of war.

Grant and Lee -- same school, opposing sides of the war. I think maybe this is one of man's greatest tests -- to stand up to what is inescapable and ... escape without recourse to fairy tales. When war won't cut it and pacifism won't cut it, what will cut it?