a blivet of tears

Over a lifetime, I suspect, there has grown within me a blivet of tears filling drip by drop. Last night, watching the news from the war-savaged Middle East, the blivet began to leak and the tears slid down my cheeks. It was all, somehow, just too damned much.

Two 27-year-old young men, each with not much more than a modicum of medical experience, were treating the young children deliberately wounded by snipers in Aleppo. The men, Americans I believe,  knew from the wounds that these injuries had been deliberately inflicted and were not just collateral damage. There were no doctors. There was no anesthetic. Everyone was hungry and frightened. The voice-over informed the TV viewer that this man or that woman had lost a brother. A father kissed his young son's forehead. The boy was petrified.

Both of these young men did what they could. One boy would not lose his leg. The girl shot in the face died despite all best efforts. One young man said that seeing any child die was horrific. He estimated he had seen 200. On the TV screen, the drip-drip-drip mounted and my blivet of tears-withheld bulged until I began to feel the wetness on my cheeks. Syrian president Bashar al-Assad, the man whose snipers were at work, appeared on the screen, long and lanky and dressed in a clean suit.

Suddenly I was ravenously sad. No amount of cajoling and consoling helped. I was crazy with sorrow. I didn't care that my self-serving anger and sadness went nowhere. I didn't care that few if any problems was ever solved out of an emotional vortex. I could no longer hold it together. This was vile. Screaming went nowhere and nowhere claimed the scene. Was I indulging myself or was it simply that not-indulging-myself was no longer an option?

As a news reporter, I had always did what I could to put sympathies to the side, to stuff them in a tear-filled blivet because sympathies and screams clouded any possible solution or resolution or diminution of whatever latest hell presented itself. Get the facts, stuff the reactions. In the hellish heat, cool the atmosphere.

But last night, somehow it was all too much. I was a Donald Trump supporter sick of filling my blivet so that others could proceed with creating the conditions that filled that blivet. Two young men doing what they could in the face of conniving and well-dressed forces ... a part of me roared, "SHOOT THE FUCKERS!" Fuck the dignity of silence and perseverance and holy-roller serenity! Please, please, please don't tell me how you would fix it!

But it was all going nowhere and I knew it. The boy would not lose his leg. The girl died. The two young men did what they could. Few if any cried on the TV screen and I sat there crying, raw as a popped blood blister ... and woe betide any asshole who tried to conjure solace. It was all too much. How do you say "no" in a world where no is no-where near the mark?

I am reduced to tears. Is that better or worse than being reduced to understanding? 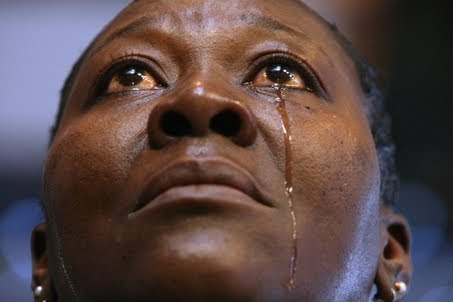