"Welcome to the Age of Anger" 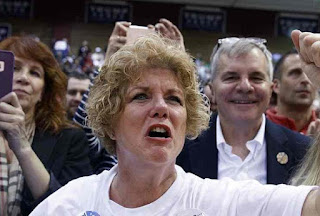 Thus far this morning, I have been immersed in an article in The Guardian entitled "Welcome to the Age of Anger." ("The seismic events of 2016 have revealed a world in chaos – and one that old ideas of liberal rationalism can no longer explain.")

Of late, I had pretty much sworn off Donald-Trump-linked hair balls of analytic thought, but the willingness of the article to take a look at both liberal caterwauling and conservative triumph -- and to look beyond the easy I-can-explain-that's -- kept sucking me deeper and deeper into the article's maw... people of good will infused with viciousness; people of viciousness veined with good will....

People are people first and intellectuals or red-necks, atheists or believers, infuriated or joyful only later. The arrogance of leaving out the people when discussing the "voters" has made my teeth itch.

This is a hell of an article, even if I have to concede the author is smarter than I by miles. It's a long, long article by Internet standards and it is probably far from perfect, but there was enough there to force me to say it felt like something closer to the truth.

Anyway ... that's how I've been spending the last hour.
Posted by genkaku at 9:45 AM