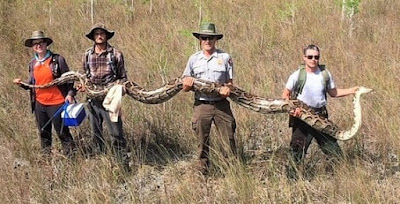 Snake hunters have captured what they say is the largest python ever found in the swamps of the Florida Everglades: a pregnant female more than 17ft (5.2 metres) long and weighing 140lb, or 63.5kg.
The team from the Big Cypress National Preserve posted news of their record-setting catch in a Facebook post that also noted the giant reptile was carrying 73 eggs.
Environmentalists have been struggling to find ways to eradicate Burmese pythons, a non-native species, from the 1.5m-acre wilderness since the 1980s, when some were released into the wild as overgrown pets. Others escaped from a breeding facility wrecked by Hurricane Andrew in 1992.

Some Florida searches for pythons offer a quick look at the seriousness with which the hunt is being conducted:


Other efforts to remove pythons have proved less successful. Everglades National Park scientists trained a beagle puppy named Python Pete to sniff out the snakes, but had to abandon the venture when Pete wilted in the heat of the Florida summer.
In 2017, two renowned snake catchers from India’s mountain-dwelling Irula tribe bagged only 33 pythons after chanting across the Everglades for two months.

Is there a child out there in the world looking wistfully into his or her mother's eyes and saying, "Mom, when I grow up, I want to be a snake catcher?"