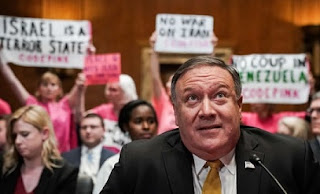 With Israeli Prime Minister once again ensconced after an election that overlooked the scandals plaguing him, finally someone mentioned the Palestinians and the fire being rained down on them by an apartheid Israeli government.

And the Americans chimed in ... but wait ... it wasn't quite as smooth as all that:


Under intense questioning about why the Israeli annexation of the Golan Heights was good but the Russian seizure of Crimea was bad, the US secretary of state, Mike Pompeo, told senators that there was an “international law doctrine” which would be explained to them later.
It turned out there was no doctrine. The state department’s clarification of Pompeo’s remarks contained no reference to one, and experts on international law said that none exists.

Did I hear someone whisper "tin-pot dictator?"

Nah ... my hearing is probably just playing me foul again.