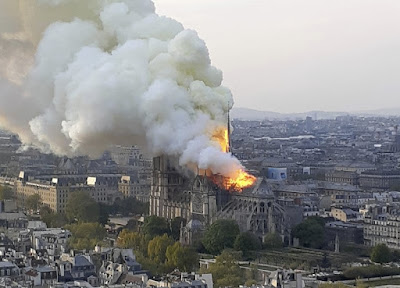 A billion-dollar repair kitty has apparently evolved in the wake of the huge fire at Notre Dame cathedral in Paris two days ago. Rich, poor, Catholic, Muslim, ordinary and extraordinary felt the sting, apparently.

The pope, beleaguered as he is with pedophile-priest difficulties, must have breathed a short-lived sigh of relief. See how important we are to the warp and weft?

The ordinary went down on their knees with hopes for the best. Notre Dame is an icon. But it is not really, in this instance, an icon of religion. More, I would guess, it is an icon to hopes for some something-or-other, some je-ne-sais-quoi lurking in every heart.

A billion dollars and people far and wide are hungry and lack water ... and here's a billion bucks for a building. Who could begrudge hope? Everyone seems to agree the fire is a first-tier important issue. Hope. But hope for what and who will take the next step to realize that hope?


The global reaction to images of flames chewing through the roof, up the spire that pointed to heaven before the blaze brought it down, and threatening the entire cathedral made clear Notre Dame was bigger than any one faith still touched the faithless.

"Faithless" is such a clunky, disrespectful word. To imagine that those who profess no religion are therefore "faithless" is ludicrous.

Who lacks faith in hope? Is s/he better or worse off?

The hungry and thirsty are hopeful, I suspect.

Hope is then but this is now. And still, who would disparage hope?
Posted by genkaku at 8:50 AM