frenzy of power, frenzy of rabble 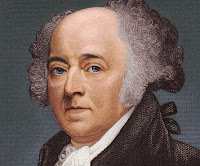 
The Adamses were students of human psychology. In their wide travels through Europe they observed the abuses brought on by monarchy. But they also saw fundamental flaws in the quasi-religious adoration of the spirit of democracy....
While humans remained subject to their passions, positive outcomes were never ensured. This is dangerous territory – after all, no one wants to be told that the dynamic story of the rise of democracy is an exercise in mass self-delusion.

The article is longish and requires thought, but perhaps it is worth it in the current climate.
Posted by genkaku at 2:09 PM