Where the rubber hits the road:

On the one hand, (wo)man is a social being, naturally leaning towards the warmth of like-minded critters.

On the other hand, each has his or her quite individualized processing mechanism for the data closest to home ... a me that yearns to get outside the cozy box of mere social connection.

To lean too far towards the one aspect creates an imbalance in the other -- a human life is not, after all, a divided matter, fractured at will. And thus, perhaps, a line like this -- from a story out of the Andes:


“Ritual and religion were profoundly important in ancient states. It is not some new age-y thing,” said Stanish. “Ritual and religion structured people’s lives, it structured the economy and the whole of society. This is how these people were able to create spectacular ways to get along and have a very successful society.”

Ritual and religion lap or crash on the social sands, wash up the beach and slip back, back, back. I'm not sure that it's true, but I sometimes think Buddhism, for example, took nourishment from the ornateness of Hinduism and, by paring away the choking vines of ritual, established its own foothold on the sands. Everything so spectacular and ordered until ... until ... everything fell apart.

Closing a circle is no mean feat.

Rules are so important -- but only to those to which the ruled accede. Rules bind and keep-safe and warm the feet on a cold night. Archaeology is a wonderful science -- partly because you get outdoors and partly because what is discovered has a putative "the end" on it. To be an archaeologist requires some dig-it-up skills. Same ol' same ol' and yet brand new.

Neat and clean, back into the waters the rules were born from, looking for another bit of social sand to wash up upon.

Structure of people's lives works right up to the moment when it doesn't work... or finds another iteration by which to warm the feet on a cold night. And, perhaps as ever, there were "social punishers" (in the story of the Andes) overseeing those who might seek to stray or break too many boxes ... as per, for example, George Carlin's ("Religion is bullshit") observation: 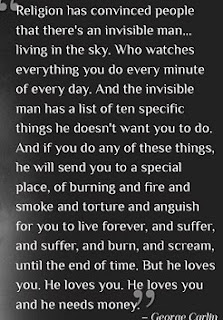 No doubt that's just a minor hiccup in the spiritually-inclined (wo)man's lexicon of coziness and social grace.

Who will meet the challenge of trying to balance or integrate or set aside all this yin-yang stuff? I tried over quite a few years. Naturally, I was not successful, but I herewith transmit my efforts and foolishness to whatever soul might like to beg off such a quest ... I wasted my time: no need for you to waste yours.
Posted by genkaku at 12:06 PM