.
When I was in college, various things interested me. Among them were billiards and writing. My addiction to the former included not only playing an average of something like three hours a day but also lying in bed at night before sleep and imagining I could play three-dimensional billiards off the walls, ceiling and floor of the room ... a billards game in some weightless environment.

And in that same bed, before sleep, I would also concoct and embellish and wonder about things I wanted to write. In the darkness, just before sleep descended, the ideas seemed to spring up or fall from the heavens with a weightless ease that never proved so easy the next day when I put pen to paper.

In one such period of feather-light conjuring, I imagined creating a story -- any story at all, fiction or non-fiction -- in a spiral. It would begin at the center and the words would curl around on themselves in ever widening circles. And once finished, another story might begin, at some nearby point -- beginning at its center and moving steadily outwards until, at some point, its words began to intersect with the first spiral-story ... and the same word that was appropriate and descriptive in spiral-one would dovetail and inform and be at home in story/spiral two. And then there would be spiral three, story three, moving outwards from its center and then intersecting effortlessly with both story-one and story-two ... and on and on it would go, each story, each spiral finding a home in every other spiral and yet quite distinctly its own tale. To say one story overlapped or superseded the other would be a mistake. Each and every tale was complete and shining on its own terms and yet each partook of its environment ... and environment the inevitably stretched to the ends of the universe. So, was it one story or many stories ... I never did find out.

This imaginative meandering seldom got very far as I lay in bed. Usually, sleep got the upper hand before I could somehow understand the rug and meaning I was weaving. Sleep claimed all tales.

I rethought of this the other day in a very concrete way when I took pictures of the zendo altar. Here is the altar, much as your comb or toothbrush might confront you on the bathroom sink: 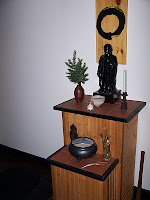 The altar had a tale to tell, depending on who was looking at it. But as I looked, I realized that each item on the altar had a tale I could remember in some detail ... a story unknown to others and perhaps even badly remembered by myself. Still each item had its spiral:

The Buddha statue is made of African Wonderstone, which I imagine, but don't know, came from Africa and was carved by a friend's mother and given to me as a gift I still consider miraculous in its rich implications and helpfulness. In front of it sits a had-made tea bowl that was also a gift, this time from a fellow Zen student. It contains water. The candle holder to the right with the long candle came from a wonderful flea market in New York, a place whose scents I can still smell ... it is intricately carved of what may be ebony and has a chip missing. Below the upper deck of the altar is an incense burner I commissioned from an excitable potter given to fits of anger in which he would smash everything he had created lately. The Kuan Yin statue to the left came from my teacher when I said to him during a visit that my younger son would love to have the word "buddha" as a brush-stroked calligraphy. My teacher really didn't want to get out the brush and ink, I don't think, so he trotted off the to the zendo hall and returned with the statue of Kuan Yin. The Jizo statue to the right of the incense burner came right off the Internet ... a fellow I never met making an open offer to anyone who chanted the Jizo dharani a statue for free. Since I did and do chant that dharani, I asked for one and it came ... from someplace far away like Singapore. In front of the Jizo is a red-tailed hawk feather -- a gift from a fellow Zen student and beautiful to this day. The enso (circle) above the altar was created when I was taking a break as I built the zendo itself ... just sitting around idly in the midst of scrap lumber when a piece of wood caught my eye ... and I grabbed some black paint and drew it and then hung it. The altar itself was constructed grudgingly after I realized that no store-bought structure was going to suit or complement the room. And all of these things, all of these spiraling, interconnected stories rest on a wide-board wood floor, which I laid down and has its own stories to tell, much as the pilings under the building do and the earth in which they rest, and the pine needles that fall gently over the whole structure and the neighbor's yappy dachshund which always seems to sound off during zazen and the squirrels the skitter across the roof and the warm air the filters in during warm weather and the cold that grips the place in winter ... and on and on and on the spirals go.

Only of course they're not spirals at all. Each and every tale is connected so intimately with every other tale that the word "intimate" is ridiculous in its smarmy tones. Woven, kind of, is about as close as anyone could come...water within water, blue sky heaped on blue sky. Everything is unalterably everything else. There is no separate story any more than there is a complete one. Best to get some sleep ... say thank you for the interlocking richness that is not interlocking at all. It is just what is ... a wonderful story, all the time, everywhere, without edges and word-smithing to capture or leash it.

It really is one story, always. But if you say so or I say so, we both deserve a powerful punch in the nose. I'm serious. The story is so much more interesting than our mewling imaginations and didactic pomposities.

Sometimes I just think we get our stories backwards -- imagining that things could somehow be separate and allow us to say things like "wondrous" or "booooring" or "beautiful" or "ugly" or "mystical" or "mundane." How stupid is that when the altar already touches the sky and your feet are planted firmly in Zanzibar? And beware the asshole who insists on the interlocking oneness of all things ... it's enough to make any sane person puke.