.
When I was a kid, sometimes we would trudge along in the left-over snows of March and gather maple sap. 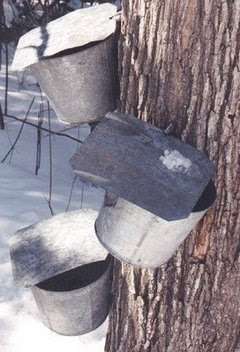 We would walk behind or ride on a sledge pulled by a couple of horses. On the sledge was a gigantic vat into which we would pour the sap that came from buckets attached to the maple trees. Once the vat was more or less full, it would be taken to the sugaring house where it could be boiled down and eventually become maple syrup.

As we gathered the sap, occasionally we would become thirsty and take a long swig out of one of the sap buckets. The sap itself was thin and cool and vaguely sweet -- a good thirst-quencher. But once inside the sugar house, there were long rectangular metal troughs into which the sap would be poured. Someone would stoke the wood fire beneath the troughs and eventually, the sap would boil. And as it boiled, frothy grey-ish bubbles would appear on the surface -- bubbles that would be skimmed off and thrown away. These were the 'impurities' in the sap.

It took hours to make maple syrup, to boil down the sap enough to create the viscous confection that went on pancakes and French toast. By the time it was done, sometimes the kids would grab a small, hot cup of syrup, go outside the sugar house, and pour it on a bit of March snow, allowing the syrup to cool down and create a kind of gooey, taffy-like candy. It was delicious.

But as I look back now, I wonder if the important lesson was not more apparent in the sips of sap we would drink ... direct from the tree, impurities and all, vaguely sweet, but always thirst-quenching. Concocting something deeeeelicious is not so much the point of spiritual endeavor, I think. A nice cool drink is enough.
.
Posted by genkaku at 7:19 AM