.
It should be easy, I imagine, but it's not and I hardly dare to write it: The whole thing is like a fish-hook in my heart ... a foolishness to try to escape and yet I squirm and flop and look for some easy, salving, grown-up, forget-about-it relief. 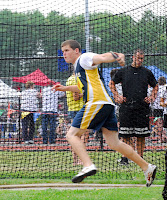 It's so minor compared to the woes of the world ... and yet where the fish hook sticks in your mind and heart, it's never minor and there is no dismissive, adult resolution.

On Saturday, my older son was off for the Western Massachusetts track meet. He was among those throwing the discus. It was to be one of his last competitions in high school -- something he had trained hard for.

When I arrived, a couple of flights (groupings) of young women were still completing their throws. Then came a flight of young men -- the ones who couldn't throw quite so far. And finally, my son's flight ... the ones who threw further and were lumped together. There was one fellow from another town/team who my son -- and everyone else -- knew was the best. He was the one to beat, if anyone could. He was very good and both his supporters and those who sought to dethrone him kept an eye on his movements.

The discus pitch or field consists of a high, netted area in the center of which is a concrete circle in which the competitors stand and from which they must make their throws. Two chalk lines angle outward from the netted area and the throwers must keep their throws within the confines of the chalked lines. Each thrower gets three opportunities.

Angus' first throw was 133 feet. His second throw fell outside the chalk lines and thus was a dud. But his third throw -- his last throw of the meet for him and perhaps the last throw of his high school career, was 144 feet -- far and away the best throw of any competitor and just six feet short of the school record. 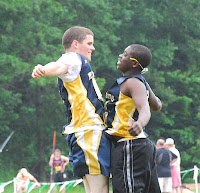 He trotted out, as required, to pick up his discus and on the way back ... on the way back his face was suffused with joy -- pure, unalloyed joy -- the kind of joy any parent would give their life to assure in their children. Not smug, not dismissive of anyone else ... just purely, openly, nakedly happy. It filled him to the four corners of the universe and he bumped bellies with a number of teammates, all of whom were happy for him as well.

It was all beyond hot-damn!

Until ... until one of the judges noticed that one of Angus' teammates had shown him an ipod photo of the moment ... a picture Angus hardly bothered to look at. The accomplishment was assured. He didn't need pictures. But the official noticed and there was a rule that there would be no pictures taken and displayed to competitors during the meet ... which was still going on. The idea of the rule seems to be that a competitor might gain some unfair advantage in his next throw. But there were no more throws for Angus. He was done.

Nevertheless, Angus was disqualified. Erased. Extinguished from the meet. The coach pleaded an impassioned case. The officials agreed they all liked Angus and could see the coach's point ... and then they agreed with the rule book.

And it was over. In the winning came the loss. It was literally stunning to those of us who did not know the rule book and, even when hearing the rule, could not get our heads around how it would apply ... except that it was a rule and the meet was still continuing and ... the rule book said.

Angus' face was still and hard as he walked away from those who would try to console him. He had to console himself and not be nagged by passing sympathies. He walked. He returned. He walked some more. And all the while I pleaded within for some words of comfort that would mean more than jackshit ... that would put that look of unalloyed joy back on his face, that would somehow WORK, that would not reflect or wallow in my feelings of sadness and yet might somehow relieve his ....

And I couldn't fucking do it!