"Mr. Death and the Red-Headed Woman"

.
Out of the blue, an email arrived from Germany this morning. A woman whose daughter had taken one of my mother's books out of the library asked me to pass along her own praise and queries to my mother.

"Mr. Death and the Red-Headed Woman" was written almost 60 years ago (it was originally titled "The Rider on the Pale Horse" in 1956) and I can remember my mother's reading it to me, pre-publication, as we sat on the living room couch. She would read me her stuff as a means of gauging its ability to hold anyone's interest. 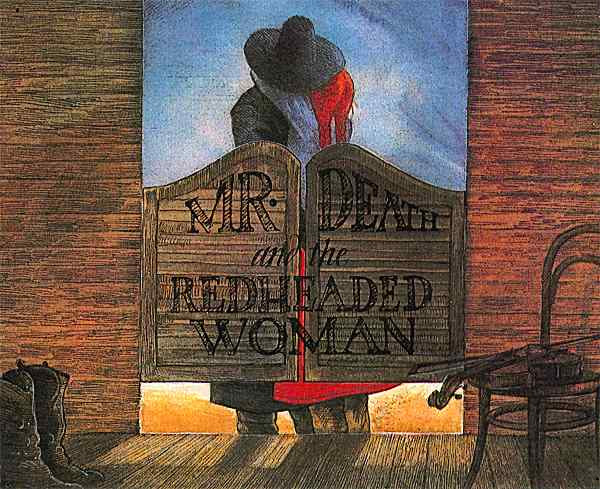 Over the years, the story has held up and held on. It's a 'fairy tale' about a young woman who goes riding after Mr. Death when her boyfriend is killed in an old-west shootout. And when she catches up with Mr. Death, she learns a thing or two ... and forgets her boyfriend.

The woman who sent the email said she wondered how my mother had gotten the idea. But that was just a springboard or pretext for telling of her own distaste for death after a friend had died in the past at the age of 20. She said she was reading my mother's small book over and over again.

Is there any telling what small or large thing will light the fuse or open the door to anyone's serious questions and doubts in this life? I don't think so. Anything can be anything ... anything can be a catalyst for anything else. And, of course, "one man's meat is another man's poison." What is serious to me is silly to you and vice versa. But it's interesting how the screw turns and there are flashes of light in the night sky.

I told the email-writer I would pass along her delight, but I would not subject my mother to her invitation to conversation. At 94, my mother's eyesight is not all it might be. But more important, she has less and less energy to be interested in what interests others ... the 'serious' stuff with which we might, in other times, sympathize. It takes energy to be sympathetic, to bat the ping-pong ball of thought back and forth, and at her age, my mother doesn't want to exert the energy: Let others play the game if they choose.

I tried to explain this and encouraged the woman not to shy away from her own uncertainties or doubt or anger. What is serious is, in the end, serious. So serious up ... not for anyone else's benefit and not because some church or tome encourages it, but because otherwise life is a nag and nobody likes being nagged.
.
Posted by genkaku at 9:08 AM