.
Once upon a time, a long time ago, I was assigned to do a series of newspaper articles about the proposal to create a new zoo in the city where I was living, Springfield, Mass.

In the course of researching the subject, I called up a lot of zoos that were considered state-of-the-art ... places that attempted to recreate the habitat of the animals held in captivity. And when probing this pretty-expensive way of doing things, one explanation that came up again and again was that the animals were "happier" in an environment that most resembled the ones from which they had been taken. 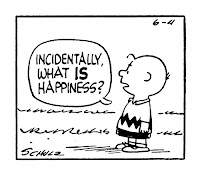 Naturally, I asked how the hell anyone could gauge the happiness of an elephant or a tiger. What, precisely, did "happy" mean? These questions elicited an almost uniform, confused and smog-like cloud of answers. The honest answer was that no one really knew, but that a facsimile environment made the captors somehow happier. The closest anyone came to defining "happy" was that the animals would breed in captivity... procreation spelled happiness.

As regarded the writing of the articles, I decided that speaking about animal happiness was just a ploy to encourage donors to part with their money. True or untrue didn't really enter the equation. But self-serving anthropomorphisms could hardly be called empirically credible. Heart-warming, sure. But accurate in any meaningful way? Well, I never found the solid evidence.

So what about people? People are animals too. Are they happy from within the facsimile environments they create for themselves? Wealth, employment, family, religious affiliation, new shoes, fucking...? And if these constitute a 'facsimile' environment, what would be the true environment, the one from which anyone might originate?

The dictionary seems to be as flummoxed about the word "happy" as were the zoo proponents. "Happy" is defined as:

-- feeling pleased and satisfied
-- used about enjoyable times, events, experiences, etc. that make people feel happy
-- satisfied that something is good or right, and therefore not worried about it

In the end, "happy" seems to mean whatever anyone says it means. And, at the same time, happiness is something that fills the heart. I may not know what it is, but I know it when I feel it. As the Dalai Lama once observed, "Everyone wants to be happy." And who could quibble with that? But the question of what it is that everyone wants is left in limbo. There is no succinct and compelling definition.

Is happiness a chocolate bar, a raise, a one-night stand, a good dirty joke, solving a difficult problem, having friends, or learning to whistle? Everyone may want it, but what is the it that everyone wants? Today, 'it' seems to be this, but tomorrow it can just as easily be that.

Well, I am not going to offer an argument that will make money off the self-help and spiritual-snake-oil bookshelves. The matter is strictly personal and strictly personal matters deserve strictly personal answers. But I do think it's something worth considering: What is it that makes me happy? Sure, there's the easy stuff -- fucking and chocolate bars -- but what is it really, without a facsimile world?

It's just a bit of mental bubble gum ... something with which to blow bubbles and on which to chew lazily. But a little care is probably warranted: No point in choking on a sweet confection.
.
Posted by genkaku at 7:38 AM