.
Awoke frisky and uncharacteristically rested this morning. The only 'problem' was that it was 2:40. I lolled a bit, thinking I 'should' go back to sleep -- it was nighttime after all -- but finally gave up and got up.

Given a recent influx of Christian-issue email, my frisky mind began by creating T-shirts:

Christ was crucified
And all I got was
A religion??!!

Enlightenment is not
For the unwary ...
Or the wary either.

And then, finding the T-shirt pond dried up, I segued back to a beer-and-chips monologue that whined before I had gone to sleep:

Given the political run-up to the November 2012 election, everyone is getting a media snootful of political posturing. Issues are not the issues with candidates; election or re-election are. The contempt in which powerful institutions and individuals often hold their constituencies (as for example by not addressing the issues in a substantive way) makes them contemptible in their own right. Not to pick on Republicans unduly, but Mitt Romney offered a good example of his blase contempt recently when discussing unemployment with a group of unemployed Floridians and saying, "I also am unemployed." In the setting, he expected and got a laugh. And no doubt there were excuses and other buffering remarks post facto ... but once again the substance of the issue was bypassed and then papered over with promises Romney or any other politician has no chance of assuring.

If such contempt comes around to make the contemptuous one contemptible, I wonder if the same yardstick might be applied to goodness. Does what is called goodness come around and, by its nature, make the good (wo)man good? I kind of doubt it ... which makes me wonder about the validity of the 'contemptible' assessment.

I guess the bottom line is the same as it has always been for me when assessing mistakes: If it's a mistake, just don't YOU do that.

True dat ... and yet it is hard not to marvel and be irritated.

The Catholic League has promised to mobilize its troops against Jon Stewart who, on his tongue-in-cheek Daily Show, skewered the latest chestnut in the political fires -- the 'war on women.' In a blaze of contemptible glory, both political parties have disclaimed any role in the war on women: Women, after all, are 51% of the U.S. population and a politician would be unwise to disregard or piss off such a constituency.

But Wisconsin gave a fair example of what the war was all about when it voted to repeal the equal pay law because, as one of the proponents of the move put it, "money is more important to men." Without Jon Stewart, whose humorous aptness varies, we'd all be watching the Joseph Goebbels Show, occasionally called Fox News. The Catholic League in its dudgeon wants Stewart to back down. Christians are offended, the league suggests. Excuse me, but is that the Christians whose cornerstone is charity and lifting up those in need ... or is it the other Christians who see nothing wrong with elevating their stock at the expense of others?

The same question might be asked of the Vatican which seems hell-bent on assuring itself as The Power in power. Not that the Vatican is alone, but its huge constituency worldwide makes it a more obvious case study.

Asserting its bishops "are the church's authentic teachers of faith and morals," a recent Vatican report came down hard on Leadership Conference of Women Religious, a group too devoted to social justice and poverty and inattentive to Catholic political planks like those on abortion and gay marriage. The conference says it represents 80% of America's 57,000 nuns. It claimed on its web site to be "stunned" by the Vatican critique. Never fear, ladies, the Vatican is sending in a bishop or two to show you the errors of your ways ... and coincidentally rewire the electric fences around its pasture. Women, even mere nuns, are a pretty formidable voting bloc ... even when they don't get to vote.

The Vatican has likewise made moves to assure that the ultra-traditionalist Society of Saint Pius X don't just dissociate themselves from Rome. "Schism" is the $5 word. The society says it has 500 priests and a million followers in 38 countries. That's nothing to sniff at, even for a Vatican that claims 1.18 billion followers worldwide. The society ran afoul of Rome by sticking with a Latin Mass, rejecting some aspects of the liberalizing Second Vatican Council, and 'illegally' consecrating four bishops -- an act that led to their excommunication in 2009. The latest pope, Benedict, lifted the excommunication order in a move towards reconciliation. "The pope values the SSPX’s commitment to Church traditions and wants to avoid their movement creating a permanent schism claiming to be Catholic but outside Vatican control."

In his very good and pretty ballsy book, "The Religious Experience of Mankind," author Ninan Smart sets out to track not so much the beliefs and regalia of various religions but rather to try to pin down the experience within those religions. I read it a long time ago and was enthralled as much as anything by the examination that led away from convenient touchstones of organization and finery and into the hearts of those professing a faith. Pretty damned nervy!

At the end of the book as I recall it, Smart offered the opinion that only two religions seemed to have what it took for a long and healthy life ... Vedanta and Buddhism. I was somewhat surprised by his willingness to go out on such a limb, though of course I was delighted that the two spiritual persuasions that drew me were Vedanta and Buddhism.

Today, I am less certain about Smart's deductions, but it hardly seems to matter much since I will be dead before the truth or falsehood of his speculations become apparent. But when I read about organizations scrambling to make sure that none of their sheep stray off the reservation -- the implicit fear and assertion of power primacy -- I wonder if things aren't drip-drip-dripping in Smart's direction ... a kind of precursor to dissolution after some pretty violent death throes.

If religion is nice, if it warms the heart for whatever reasons, what need is there to be so craven and self-serving and nasty? Isn't this a poor man's recipe for disaster? Not trying to pit one thing against the other, but one of the things I always liked about the practice of Buddhism was the implicit teaching, verified in experience, that people are welcome to disbelieve: "Go out and sin some more" seems an almost-adequate expression of that confidence. You don't gotta be a Buddhist to suffer the lash of change.

Well, as P.T. Barnum was falsely credited with saying, "There's a sucker born every minute."

The man who actually said it, banker David Hannum, was miffed at P.T. Barnum when he uttered the line. Barnum had one-upped the money-making Cardiff Giant hoax in which Hannum and a four-man syndicate had invested $30,000 in 1869. 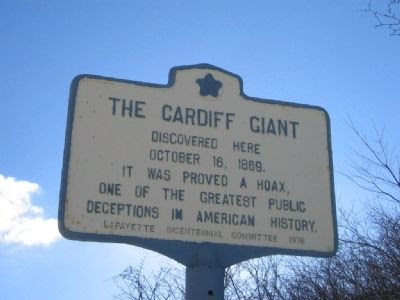