.
I went rummaging along the dusty bookshelves yesterday, looking for "The Dogs of War," an entertaining, potato-chip novel about a group of mercenaries hired by a British company to take over a mineral-rich country in Africa. I knew I had the book somewhere, but couldn't find it. For some reason, I wanted to read again, to be entertained and diverted. There were no good movies on TV, so reading would have to do. But I couldn't find the book I wanted so, partly out of curiosity, I pulled out "Brideshead Revisited," a novel that qualifies as 'literature,' I suppose. It was a mild surprise to find myself delighted with the chocolate-mousse writing, so lightly confected and yet dense with flavor. "I can still read," some voice in my head whispered ... and was strangely pleased.

I probably won't finish Evelyn Waugh's book set in early 20th-century England: There is only so much chocolate mousse a man can eat.

The delicate distances that the literati -- especially the Brits and the Japanese? -- can maintain are both alluring and revolting. Those distances, like any other, posit a cultural and social certainty that beckons: It is as attractive to be in the presence of literary certainty as it is to feel the warm embrace of any group ... right down to the Ku Klux Klan, I imagine. To swim in waters uninhabited by sharks ... how delicious and self-confirming is that? Maybe that's what's nice about reading -- the sharks, even when depicted in excruciating detail -- are under control between two covers. It's just a National Geographics show on TV -- a chance to view the wonders and horrors and not get bitten. Things are under control. However unsafe the waters, still I am safe. 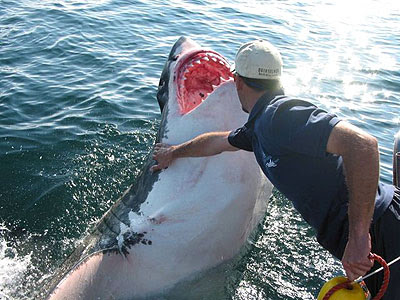 Perhaps I am growing up a little, but maybe not. I grew up feeling the full force of the intellectual lash -- the safe haven of intellectual pursuit that tried so hard to make life imitate the sharkless realm of art: If I think hard enough and analyze deeply enough, and mortar the walls of brilliant philosophy or understanding, then the real-life sharks will not take a bite out of my ass. I will be safe. But of course it wasn't true. Sharks don't care whether they take their sustenance from the ass of a wise man or a bumpkin. The distances and delights of intellectual chocolate mousse don't concern life's sharks: They're red meat critters.

But where once I feared the falsehoods of brilliance -- so assured, so distant, so loveless -- now, reading Waugh's book, I felt as if a knot had eased. No need to fend off this pitiless capacity ... no need any more than there was a praise-worthy reason to embrace it. Like all fortresses of certainty or excellence, this was just another distance to use. Holding things at bay -- through delicious wording or redneck bias -- was just a way of pointing out that the function of distance is to point out the failure of distances.

Words cannot capture experience. Philosophy and religion cannot capture life. There is no capturing distance that can keep the sharks at bay and it is useful to remember that shark attacks, while viscerally very scary, are events that some people actually survive.

Distances are not all that bad. They may not be true, but it is through that untruth -- that control, that safety, that group hug, that adoration or horror -- that their fictional nature becomes apparent. It is as if our distances were suggesting gently, "Distances are untrue. It's no big deal. It's just untrue. Relax. And then, without any particular fanfare, notice what is true. Sharks, after all, don't think of themselves as menacing. Why should you?"

I once read that when a swimmer enters the ocean, before the water reaches his thigh, something more that 50 species of wildlife had checked out his advancing legs ... including two or three kinds of sharks. I don't know if this is true or not, but I like the imagery, irrespective of whatever the facts might be. Sharks and sea urchins and crabs and minnows and no swimmer is exempt ... even one who reads Evelyn Waugh or belongs to the Ku Klux Klan. The water offers up its cool blessing irrespective of who's doing the swimming.

Not imperative in any sense ... but nice.

Chalk this post up to a poor swimmer dipped in chocolate mousse.
.
Posted by genkaku at 8:39 AM