.
America -- or at least parts of it -- is being swept up in a frenzy of delighted anticipation as tonight's drawing for a $500 million lottery prize nears.

Downside be damned! I could pay off the mortgage, pay for my kids' college education, and...and...and.

The fact that there is one chance in 175 million to win makes no difference: Someone's gotta win and you can't win without playing, so ...

Funny how upside frenzies of love or longing blind the mind and heart. Of course there are heads that like to think of themselves as 'cooler,' but that's largely intellectual bullshit: Where a frenzy of love or longing enters, everything gets thrown into a cocked hat. Caution and common sense seem to have taken a vacation in Fiji ... or anyway they aren't around.

As to the lottery, the Associated Press ran a story today about the downside of big winnings: Guilt, loss of friends, confusion, joy, distrust ... but of course the current frenzy only hears such caveats with half an ear, if that: They couldn't handle it but I know I could. 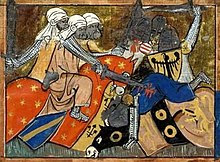 In the 11th, 12th and 13th centuries, the Roman Catholic Church extended to any who were willing to become Crusaders a free pass into heaven. It was like James Bond's 007 designation -- Crusaders were given license to kill or do damned near anything else and those actions would not be subject to canonical sanction or heavenly punishment, the church assured them.

At the time of the Crusades, Christianity and Islam had pretty much staked their claims -- Christianity to northern and western Europe, Islam to the Middle East and the south. Christians wanted access to their holy cities, notably Jerusalem, and were pissed off by the discrimination some Christians had suffered at the hands of some Muslims. The fact that these two religions sprang from the same Abramic roots didn't seem to deter a ticked-off Vatican.

So as an added inducement, the Crusaders got the pope's OK to rape, pillage and slaughter without heavenly reprisal. How about that for an up-side jackpot? Maybe it was a little like the Muslim suicide bombers of today ... automatic martyrdom and manna (including virgins) in heaven. One account from the time of the Crusades described the streets of Baghdad as running (literally) "ankle-deep in blood."

Eventually, the Crusaders got their asses kicked, but that was not before the population of heaven underwent a significant and imaginative uptick. The frenzy of a good deal paid an eventual price.

And I wonder sometimes about the frenzy that might lead someone to take up a spiritual persuasion. The promises are delicious, even for those persuasions that are less prone to imaginative belief: Heaven and hell may be small-potatoes bits of imagination, but they are enough to convince many; and for those who remain unconvinced, there is always "enlightenment" or "peace in the heart" or something equally capable of inspiring a jackpot frenzy. Gimme a 007 rating and watch me go!

No one can see into the future, so avoiding all of the downside repercussions to anything is impossible. But it strikes me as a good habit to get into -- where the upside frenzy comes calling, where the bliss and benefits entice, where glory and honor await ... be prepared for a bloodbath of some sort.

There simply is no heaven without its handmaiden, hell. There is no wealth without poverty.